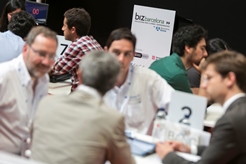 Bizbarcelona attracts 26% more SMEs, which now account for almost half its visitors

After two days of intensive activity, Bizbarcelona by Barcelona Activa closed this afternoon at the Montjuïc exhibition centre having consolidated itself as THE event for galvanizing the business world and entrepreneurial activity in Catalonia. This fifth edition of the event saw an increase of 26% in the number of visitors from small and medium-sized enterprises compared to 2014, which demonstrates that the show’s decision to include strategic factors on business growth in its content was the right one. At the same time, entrepreneurs returned to Bizbarcelona to find solutions, inspiration and financing to put their ideas and business projects into action.
The first results of Bizbarcelona are evident in the strength of the business ecosystem and entrepreneurial activity in Barcelona and Catalonia: 1,610 contacts were made between entrepreneurs and the representatives of around thirty investment entities; 600 meetings took place between SMEs interested in exporting and experts in internationalization from the Barcelona Chamber of Commerce and CaixaBank; 523 personalized business advisory sessions were held; plus 940 Speed Dating contacts, 371 meetings in the Reempresa re-enterprising area, 40 video-pitch recordings and over 1,340 messages on The Wall. The event expected to exceed 12,400 visitors, almost half of them SMEs.
This year, Bizbarcelona – which for the first time was divided into the sections of Bizemprèn for entrepreneurs and Bizpimes for companies – played host to a total of 198 conferences, 303 speakers, 26 networking areas and 89 exhibitors.
The show’s director, Aleix Planas, highlighted the “essential role of Bizbarcelona when it comes to bringing together and showcasing the entrepreneurial and business potential of the country, and disseminating the tools and support offered by over one hundred public and private organizations to accelerate and grow incipient or consolidated businesses.” Planas particularly rated the rise in visitor numbers from the SME collective, “which positions Bizbarcelona as a forum of knowledge and solutions for driving growth, innovations and exports among small and medium-sized enterprises, which has the knock-on effect of creating employment.”
Meanwhile, the other half of Bizbarcelona is still the territory of new entrepreneurs, justified by the fact that Catalonia’s entrepreneurial sector (7.54%) is very much higher than the European and Spanish averages (6.9% and 5.47% respectively), according to the GEM-Cataluña 2014 Report presented at the show. The report stated that in the last four years people have been starting up businesses less out of need and more due to business opportunities, and that the closure of companies has dropped by half in the last year.
In this respect, this year’s Bizbarcelona has helped to identify these new opportunities in emerging sectors, confirming the boom in social and cooperative entrepreneurship, and underlined the need for entrepreneurs to be able to source affordable financing options to bring their projects to fruition.
In fact, today the first award for Social Entrepreneurship was presented at Bizbarcelona, following a competition organized by Barcelona Activa among the participants in a programme to create a company with a social impact. The winner was Rebobinart, geared towards managing public spaces destined for urban art in which to promote actions with a social and cultural impact. Other finalists included FunTrip4All, an initiative to bring together tourists with special needs and local guides, and Real Funding, a platform which supports credit at affordable terms for funding business projects that bring social or environmental benefits to their communities.
Bizbarcelona by Barcelona Activa is promoted by Barcelona City Council, the Government of Catalonia, “la Caixa”, Barcelona Provincial Council, the Barcelona Chamber of Commerce and PIMEC. More than 100 other entities that form part of the Bizcommunity also collaborate by providing content and promoting the event.
The next edition of Bizbarcelona will be held in June 2016.
Barcelona, 2nd July 2015
Communication Area
Fira de Barcelona
Av. Reina Maria Cristina, s/n
08004 Barcelona
Tel. 93 233 20 00
prensa@firabarcelona.com
Previous
Next