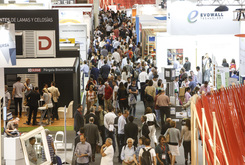 BBConstrumat envisages an exhibition based on innovation to transform the sector

The 21st Barcelona Building Construmat, Fira de Barcelona’s International Construction Fair, to be held from 14 to 17 May at the Gran Via venue, will display a commitment to innovation, knowledge and the promotion of business as elements essential for leading the transformation of the construction sector. The event, which will be attended by major companies from all the sectors making up the industry, will be divided into four main areas (Future Arena, Industry Arena, Talks Arena and Meetings Arena).

Barcelona Building Construmat (BBConstrumat) is preparing next year’s fair to consolidate the trend of its predecessors, during which it has established itself as a sectoral leader to overcome the challenges it faces in the coming years. The impact of digitization, sustainability, new public policies, the design of cities and the influence of all the above trends on housing are issues the sector has to confront.
In this regard, Ana Vallés, President of BBConstrumat, declares that “the Fair must continue to constitute a meeting point and a source of inspiration for the sector, providing new ideas and bringing together all its agents, especially those leading innovation. Barcelona Building Construmat thus adds a unique value to the sector”.
From 14 to 17 May next year, BBConstrumat will occupy roughly 34,000 square metres of Pavilion 2 of Fira de Barcelona’s Gran Via venue with a fair that will once again showcase a broad cross-section of the industry’s value chain, a sector fundamental to the economy.
BBConstrumat will be divided into four large areas. The 2,000 square metres of the Future Arena will display the most innovative and transformational projects in the sector; the Industry Arena will exhibit the latest products on the market in an area covering over 13,500 square metres; the Talks Arena will bring together prominent speakers to discuss the future of cities; and the Meetings Arena will be the space for networking and business relations.
Ione Ruete, Director of BBConstrumat, points out that “our fair is the only event in the construction industry that assigns more than 2,000 square metres to innovation, reflecting the importance we attach to this issue, one we regard as essential for the present and future development of the sector”.
For 2018, as a prologue to the fair, BBConstrumat has organized a programme of activities known as BBConstrumat Series, consisting of BBFuture, a set of conferences organized in partnership with the UIC Barcelona School of Architecture; BBTalks, a seminar for debating urban renewal, and BBMeetings, a contract forum to promote business contacts between interior decorators and designers from the hotel industry, set to take place in October in Madrid.
Barcelona, 20 June 2018
Communication Area
Fira de Barcelona
Av. Reina Maria Cristina, s/n
08004 Barcelona
Tel. 93 233 20 00
prensa@firabarcelona.com
Previous
Next