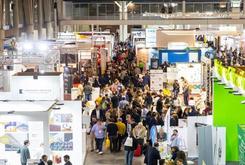 BBConstrumat closes its 21st edition whose keynotes were sustainability and innovation

The 21st edition of Barcelona Building Construmat, Fira de Barcelona’s International Construction Exhibition, closed its doors today after four days of intense activity, having consolidated its commitment to sustainability and innovation as its main themes. The very design of the trade fair, with zero waste initiatives, aimed to show the path that the sector is following to contribute to environmental balance.
Ana Vallés, president of Sorigué and BBConstrumat, said that “visitors to the event this year have been able to see the many innovations that, in terms of sustainability, circular economy and energy efficiency, are already a reality and that the construction sector is taking a decisive step in this direction”.
Thus, BBConstrumat presented Sustainable Solutions, an initiative in which two houses have been built within the energy efficiency parameters of the PassivHaus concept and which were one of the great attractions of the trade fair.
As far as innovation is concerned, the Future Arena space presented 2,000 m2 of initiatives to bring RDI closer to the construction sector with demonstrations of robotic arms and minirobots, among other tools. Twelve entrepreneurial projects also participated in the Startup Village. In addition, digitalisation, especially BIM technology, aroused great interest among professionals in The BIM Spot area, with the participation of 26 companies.
This edition of BBConstrumat, which took place from last Tuesday 14th in Hall 2 of the Gran Via venue, was the one with the largest growth in recent years, with 34% more exhibiting companies than in 2017, reaching 422 exhibitors and the 1,000 brands represented, and more than 54,000 visits from professionals with major decision-making and purchasing power.
In addition to being a great commercial showcase, BBConstrumat once again demonstrated its status as a benchmark in the theoretical field with the celebration of ‘Interiors Lovers’, a meeting of interior design professionals, the congress ‘Logics of innovation and change’, which featured debates about expanded architecture, based on innovation and experimentation as a response to current social and environmental challenges with more than 3,000 attendees.
The trade fair has fostered all kinds of business contacts. Thus The Professional Spot brought together 30 architecture and engineering firms, more than 150 B2B meetings were held at the Meetings Arena and institutional delegations from countries such as Austria, Belgium, Holland and Luxembourg (Benelux), Chile, China, Cuba, Iraq, Iran, Italy, Oman, Pakistan and Thailand visited, along with construction chambers from Latin American countries such as Ecuador and El Salvador, as well as representatives from the European Federation of Construction Chambers, among other activities.
Barcelona, 17th May 2019
Communication Area
Fira de Barcelona
Av. Reina Maria Cristina, s/n
08004 Barcelona
Tel. 93 233 20 00
prensa@firabarcelona.com
Previous
Next