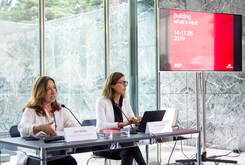 Totally sustainable buildings, robotics, IoT, BIM, 3D printing, new materials and the latest advances in the industry will be the focus of the 21st edition of Barcelona Building Construmat (BBConstrumat) which, together with leading companies and international technology centres, will promote energy efficiency, digitalisation and internationalisation as levers for transformation. The Fira de Barcelona trade fair is consolidating its commitment to innovation in an edition whose number of exhibitors has grown by 34%.
BBConstrumat 2019 will include the leading companies from all sectors in the construction value chain. Aislux, BASF, Blindbox, Ciments Molins, Cosentino, Durmi, Hager, Jung, Knauf, Kömmerling, Layher, Marcegaglia, Panasonic, Plataforma Passivhaus, Pladur, Roca, Sika, Simon, Sorigué, and Strugal amongst many others will participate.
BBConstrumat, which takes place from 14th to 17th May at the Gran Via venue, confirms the sustained growth of the trade fair in line with that experienced by the industry in recent years. In addition to 405 exhibitors and more than 1,000 brands, BBConstrumat will occupy 14,889 net square metres, an increase of 8%.
Ana Vallés, president of BBConstrumat and the Sorigué group, states that “our trade fair is the main benchmark for a sector which, at the moment, is once again an engine of our economy and, as such, points to innovation, digitalisation and connectivity as the keys to sustainable growth”.
Sustainability, the key to the future
Thus, BBConstrumat will present Sustainable Solutions, an initiative from the companies Evowall and Arquima who will construct two 90 m2 residential buildings that meet the energy efficiency criteria of the PassivHaus concept, showing all the elements required for a fully sustainable house.
In the same vein, the trade fair takes a step forward in promoting the circular economy and sustainability. Thus, and in partnership with the consulting firm Lavola, the Zero Impact programme has been launched to minimise the waste generated during the trade fair with initiatives such as reducing single-use plastic, using wood with the Programme for the Endorsement of Forest Certification (PEFC) seal or donating food that has not been consumed to the NGO Nutrition Without Borders.
The architect Josep Ferrando is designing the common spaces in an ephemeral architectural project in which priority is given to the reuse of materials such as large beams used in the construction of the Sagrada Familia temple.
Latest trends and startups
BBConstrumat is structured around four main thematic spaces (Future Arena, Industry Arena, Talks Arena and Meetings Arena).
The Future Arena, the space for disruptive innovation at the trade fair, will present the most transformative projects over 2,000 m2, being the only European industry event to do so. These projects include Co-working Robots from the Institute for Advanced Architecture of Catalonia (IAAC), two robot arms that will build architectural components in a live demonstration; Kubik and Digital Twin from Tecnalia, a dynamic and virtual model of physical structure using Big Data; an immersive and remote experience of buildings built through augmented reality from the European Design Institute (IED) in Spain; Phi from the Strelka Institute in Moscow, a platform for distributing renewable energy in residential neighbourhoods; or the three presented by the Massachusetts Institute of Technology.
There will also be a startup area, the Startup Village, which includes Biprocel, who has created a new biotechnological material from cellulose waste; Civigner, a software to design and manage civil infrastructures in a web and 3D environment; or Saalg Geomechanics, a programme to monitor the construction processes of a project. Also, at the Future Arena, the latest developments from exhibitors will be presented in the Showroom and they will explain them in the Technical Corner, an area curated by the Mies van der Rohe Foundation.
Business, internationalisation and knowledge
The Meetings Arena, the area dedicated to networking and commercial relations, will host the first ‘Interior Lovers’ congress, a conference for interior design professionals from areas such as retail (trade), contract (hotels) or offices.
In terms of international relations, BBConstrumat will have a programme of international visitors from countries such as Argentina, Chile, Colombia, Israel, Mexico and Peru, who will attend the event with the aim of acquiring products or reaching commercial agreements with exhibitors. The Meetings Arena will host B2B meetings and a programme of conferences and workshops, as well as an advisory area for access to international markets by the Spanish Institute for Foreign Trade (ICEX) and Acció, the Catalan Government’s agency for enterprise competitiveness.
The Talks Arena will host the conference ‘Logics of Innovation and Change’, which will feature, among others, the Italian historian and architecture critic Mario Carpo or the British architect and professor at Harvard University, Neil Leach, to debate about a new type of architecture based on innovation and experimentation to respond to current social and environmental needs.
New areas for professionals
The trade fair will have a professional services area (The Professional Spot), a pioneering initiative in construction events, where architecture, engineering and interior design companies will be able to offer their services and showcase their projects to both visitors and exhibitors. It will also have a space (The BIM Spot), coordinated by the ITeC, to show new work management models such as BIM technology, LEAN philosophy or IPD collaborative contracts, based on new technologies and increased collaboration between professionals.
BBConstrumat will round off its 2019 edition with the BBConstrumat Awards and with activities such as a workshop organised by the European Commission to promote energy efficiency in the construction industry, a day to publicise the European Union’s ‘Women can build’ project for more women to train for construction work or a Job Market Place organised by Barcelona Activa for professionals in search of employment.
Barcelona, 3rd May 2019
Communication Area
Fira de Barcelona
Av. Reina Maria Cristina, s/n
08004 Barcelona
Tel. 93 233 20 00
prensa@firabarcelona.com
Previous
Next