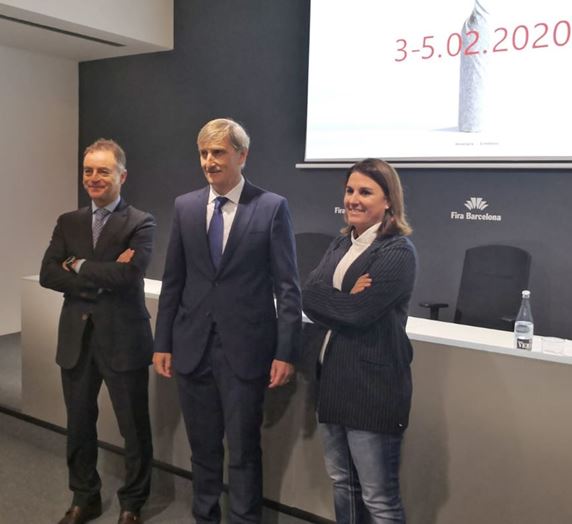 The first edition of Barcelona Wine Week (BWW) aims to become the largest platform for showing international operators the extensive range of wines from practically all of Spain’s autonomous communities. Around 550 companies will be taking part in the show, in which 40 Spanish Designations of Origin (DO) will be represented.

Barcelona Wine Week, organised by Fira Barcelona through its company Alimentaria Exhibitions, will bring together and highlight the variety and quality of the offerings from the various Spanish wine regions, providing space for all types of wineries and specialities. This innovative professional event will be held for the first time at Fira Barcelona’s Palau 8 on the Montjuïc exhibition centre from 3 to 5 February 2020.

Based on a disruptive concept and format, the show -which is postulated as the great Spanish wine fair in the eyes of international operators-, will constitute a sensory journey through the territory. Thus, the exhibition space will be organised into two major areas: the main area, BWW Lands, which brings together wineries organised by Designations of Origin and other quality labels, as well as organic and biodynamic wines, and BWW Groups & Complements, where large winemaking groups will be joined by companies offering equipment, accessories and services geared towards the sector. Likewise, distillates will be represented at the show, within the Barcelona Cocktail Art space.

The main companies, institutions and organizations of the sector at national level will participate in Barcelona Wine Week. The vast majority of the Autonomous Communities will be represented, as well as 40 DOs from all over Spain. By surface area contracted and number of exhibiting companies, Catalonia is the Autonomous Community with the largest presence, followed by Castilla y León, La Rioja, Euskadi and Navarra.

In total, approximately 550 companies will be exhibiting at the show, which is supported by the Spanish Wine Federation (FEV) and ICEX Spain Export and Investment.

As Javier Pagés, chairman of Barcelona Wine Week and DO Cava’s Regulating Council, pointed out, “the show will allow the Spanish wine industry to project the excellence and diversity of its wines to the world, as well as showing the work and effort in innovation that they are making to diversify their products and adapt them to different markets”.

Barcelona Wine Week’s priority is to increase business opportunities and maximize the return of the exhibiting companies, which will be able to establish numerous contacts with foreign wine buyers (importers, distributors, wholesalers, retailers, etc.), with the ultimate goal of increasing their exports.

Through the BWW Hosted Buyers programme – which is supported by ICEX – the show has invited close to 300 top-level international professionals from 50 countries considered strategic by the sector, headed by the United States, Germany, China-Hong Kong, Canada, the United Kingdom, Sweden, Russia, Denmark, Colombia and the Netherlands. Each of these specialized buyers interested in the Spanish market -of which more than 50% have a turnover of more than 2 million euros a year- will hold a minimum of ten meetings with the selected exhibitors. Some of the most outstanding hosted buyers will be the US import company Tri-Vin Imports Inc, the German company Weinwelt, the Chinese company COFCO W&W International or the Russian company Vinoterra, as well as the British chain Selfridges.

“Barcelona Wine Week has made a great effort to attract the most interesting foreign buyers for Spanish companies whose business is largely oriented towards exports. At the same time, it offers international visitors, the majority of whom are importers, an exceptional opportunity to discover first-hand a wide range of quality Spanish wines, as well as to identify new trends and projects, and enjoy original proposals linked to art, music and gastronomy,” said J. Antonio Valls, managing director of Alimentaria Exhibitions.

In addition, the show’s organisers have invited 1,000 Spanish buyers through the VIP Buyers programme. In total, the show expects to bring together thousands of professional visitors and hold more than 5,800 B2B meetings.

A program with more than 50 activities

The new event will also make a difference through a comprehensive programme of activities that offers surprising sensory experiences and promotes knowledge about wine, emphasising its links with culture and gastronomy.

The BWW Hub will offer different tasting sessions and lectures by prestigious experts – such as Wine Spectator’s executive editor, Thomas Matthews; sommeliers François Chartier and Ferran Centelles; Master of Wine Pedro Ballesteros, winemakers Miguel and Mireia Torres and oenologist Antonio Flores, among many others. Some of the topics that the speakers will deal with are sustainability and respect for the territory, new ways of acquiring and consuming wine, the digital wine market and the latest trends in cocktails – such as non-alcoholic distillates or sustainable distilleries. In addition, a series of synaesthetic tastings will take place at the BWW Hub, where participants will be able to experience how music can affect the taste of wine.

Possessing the largest area of land dedicated to vineyards (953,000 hectares) in the world, Spain occupies the first position in wine exports, with more than 21 million hectolitres per year, according to data from the Spanish Wine Market Observatory (OEMV). In addition, Spain increased in the first ten months of 2019 by 1.9% its exports of bottled wine, a figure that represents 802.3 million liters and a value of more than 1,830 million euros. The main target markets for Spanish wines are the UK, Germany and France, although the most significant growth in sales can be seen in Portugal, Japan, Canada and Russia.