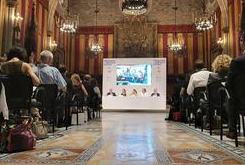 From 2021 onwards, Fira de Barcelona will host Integrated Systems Europe (ISE), the world’s largest professional exhibition focusing on audio visual (AV) and systems integration solutions. The trade fair, established in 2004, is organised by Integrated Systems Events, a company owned by industry associations AVIXA™ and CEDIA®. Following the huge growth experienced in recent years, with the event attracting 1,296 exhibitors and 80,923 attendees in 2018, the organisers have chosen the Gran Via venue as the permanent location for this great global event.
At the official presentation ceremony, held in the Saló de Cent or Great Hall of the City Council, all the institutions involved in the decision to relocate ISE to Barcelona expressed their satisfaction at the plans to hold this major new technological event in the city.
On behalf of Barcelona City Council, Mayoress Ada Colau displayed her conviction that “Barcelona and ISE will be strengthed together”. Colau celebrated Barcelona becoming the venue of ISE from 2021 onwards and stated that “we are convinced that the fact that one of the main exhibitions in audio visual solutions as ISE chooses Barcelona to grow is itself a clear indicator of our strategic position as a city committed to talent and innovation. We work to enlarge a rich and professional economic and business ecosystem and we could count now on a new partner to make it better and beyond”.
In the same vein, Àngels Chacón, the Catalan Government’s Minister of Enterprise and Knowledge, stated that “the technological leadership of Catalonia is characterized by an ecosystem formed by more than 1,250 start-ups, 8,642 foreign companies, universities that lead the international rankings and where more than half of the Catalan companies innovate. A local ecosystem that will take advantage of the showcase that the ISE is to present its projects to the world, access new forms of innovation and generate opportunities between companies and professionals within the audio-visual sector.”
On behalf of Fira de Barcelona, General Manager Constantí Serrallonga highlighted that “hosting ISE will contribute to the further consolidation of the trade fair institution as one of the main international venues for technological events. ISE is perfectly in keeping with Fira’s strategy of supporting economic sectors with great potential for growth and international projection.” Serrallonga added that “having an asset such as the Gran Via venue, together with Fira’s experience and professionalism, means the institution and the city constitute a first-rate international business platform, which is attractive for operators committed to the staging of their events.”
The presentation ceremony was also attended by the organisers: Mike Blackman, Managing Director of Integrated Systems Events, David Labuskes, CEO of AVIXA, and Tabatha O’Connor, CEO and Global President of CEDIA, who expressed their deep satisfaction with the step taken to further the progress and growth of the event.
Speaking at the event, Mike Blackman, Managing Director of Integrated Systems Events said: “Over the past 18 months we have undertaken exhibitor and attendee research and we have visited many of Europe’s leading exhibition venues. Ultimately, Barcelona was our unanimous choice.  Fira de Barcelona is one of Europe’s leading exhibition and conference locations, and Gran Via, the venue we will use for ISE, is one of Europe’s largest and most modern exhibition venues.  It blends outstanding architecture with exceptional functionality across 8 halls and 200,000 sqm.  In fact, our exhibitor and attendee research revealed that Barcelona was the destination of choice for dining, entertainment, hotels and lodging. So I believe we are in safe hands and with this announcement today our exhibitors and attendees can plan ahead with confidence.”
The first ISE in Barcelona will be held from 2 to 5 February 2021 at the Gran Via venue, as announced by its directors.
Barcelona, 19 July 2018
Communication Area
Fira de Barcelona
Av. Reina Maria Cristina, s/n
08004 Barcelona
Tel. 93 233 20 00
prensa@firabarcelona.com
Previous
Next