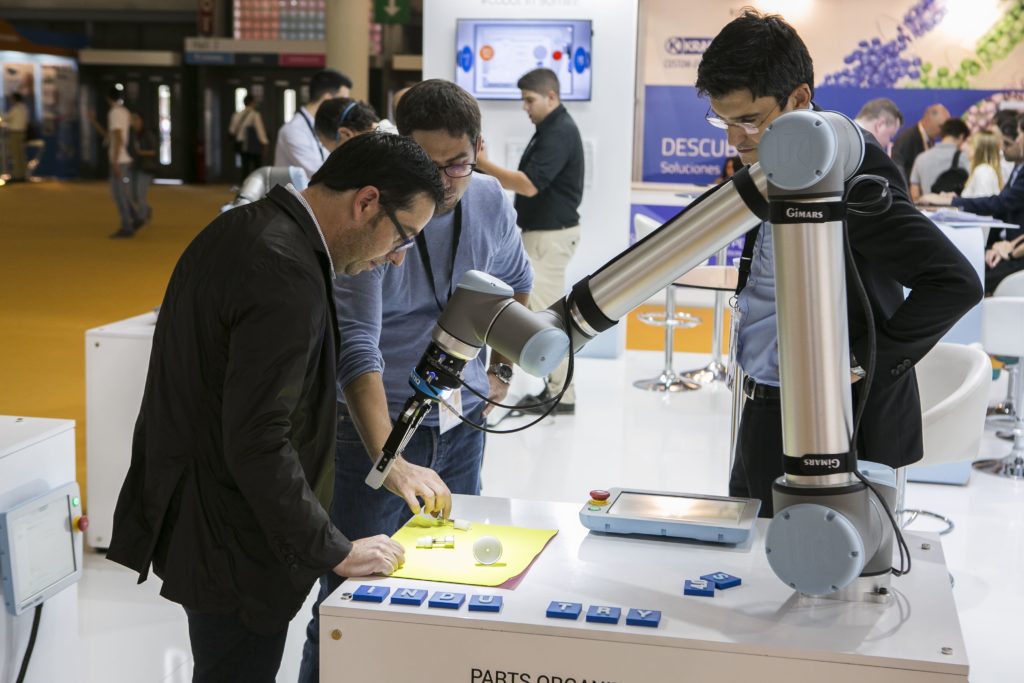 From 16 to 18 October Barcelona will become the capital of the digital transformation for the second consecutive year with the staging of Barcelona Industry Week (BIW), a platform organized by Fira de Barcelona to promote the so-called Industry 4.0 and its application in all sectors: industry, transport, logistics, energy and health, among others. In its second year, it will bring together three events, HEALTHIO, IN(3D)USTRY From Needs to Solutions and IoT Solutions World Congress (IoTSWC), which will cover raw materials, mass and personalized production, process automation, smart connectivity, cybersecurity and disruptive transformation.

The event, which will take place at the venues in Montjuïc (HEALTHIO and IN(3D)USTRY From Needs to Solutions) and Gran Via (IoTSWC), will bring together more than 21,000 professional visitors, who will be able to find out more about the new products of the 450-plus exhibiting companies and listen to the almost 600 experts who will take part in the talks and panel discussions scheduled over the three days the fairs will be held.
The three events will thus coincide and focus on promoting innovation in industrial manufacturing processes and supporting companies in their digital transformation, thus attracting professionals interested in identifying the most innovative and cross-sectional ranges throughout the chain of production.
Salvador Tasqué, Fira de Barcelona’s Business Director, is “convinced that Barcelona Industry Week is establishing itself as a tool to support and promote the digital transformation of companies, a key present and future challenge for their competitiveness”. He adds that “by merging different events from complementary fields, we are able to offer a comprehensive vision of the innovations available and the most effective transformation strategies”.
Industry 4.0 Seminars with the Zona Franca Consortium
In partnership with the Zona Franca Consortium as the main sponsor, BIW will organise a series of activities which, with the motto Inspiring the industrial future, will address the impact of Industry 4.0.
In addition to a series of talks, presentations and dialogues concerning the so-called Fourth Industrial Revolution, Barcelona Industry Week will provide a platform for the presentation of the high-tech incubators which are being developed in Europe and will display one of its most prominent deployments in industry, the Advanced Manufacturing Hub for 3D printing in the Zona Franca of Barcelona.
Similarly, BIW will present a side event on so-called ethical hacking and cybersecurity, co-organized by Fira de Barcelona, Advanced Music, the company which organizes Sonar and Sonar+D, and the Light Eyes consultancy firm. This event will feature prominent international speakers and a hacking activity set to last 24 hours.
IoT applied to the business sectors
IoT Solutions World Congress, the primary event on innovations related to the industrial Internet of Things (IoT), will take place from 16 to 18 October at the Gran Via venue.Organized by Fira de Barcelona and the Industrial Internet Consortium (IIC), it will bring together a congress, commercial exhibition and testbeds to promote professional networking. This year’s show will confirm the increase in IoT implementation and also demonstrate the convergence of this technology with artificial intelligence and blockchain.
The participation of more than 300 exhibitors from all over the world is expected, among them IT companies, software platform developers, hardware manufacturers, security firms, telecommunications operators, service operators and industrial automation companies. The above include ABB, Deloitte, Huawei, Google Cloud, Intel, Microsoft, Sas, Telit, Vodafone, Wipro, Dassault Systèmes, Fiware, Kaspersky, Libelium, Software AG, Orange, Telefonica and Thingstream. IoTSWC 2018 will once again open its testbed area, where demonstrations will be held to see the 10 winners out of the 60-plus companies from 20 countries in operation.
For its part, the congress area will gather more than 250 international speakers. The sessions will revolve around nine thematic axes: connected transport, manufacture of goods, healthcare, energy and supplies, construction and infrastructure, facilitating technologies, blockchain and artificial intelligence, the latter two with their own forums. A new feature this year will be the organization of several workshops to take a closer look at aspects of IoT technology approved by the IIC and the holding of a meeting of female managers who head the international IoT ecosystem.
Innovations in the field of health
There will be a wide range of products from the innovative ecosystem of the health field on display at the second HEALTHIO, which will take place in Pavilion 8 of the Montjuïc venue. Visitors will be able to test and experiment with highly advanced techniques and practices employed in the healthcare system, in situ, by means of 24 itineraries divided into three thematic areas (health and well-being, personalized medicine and chronic illnesses and ageing), in which the latest applications designed to facilitate the empowerment and decision-making of health users will be displayed.
HEALTHIO will welcome 95 exhibitors, including the Hospital Clinic, the Germans Trias i Pujol University Hospital, the Vall d’Hebron Hospital, the Consorci Sanitari Integral and the Guttmann Institute and leading companies such as Roche, Sanitas Hospitales and Intersystems and will bring together more than 240 speakers. It is also expected to attract about 3,500 visitors. In addition, it will host the Health & Bio Team Dating, a Biocat, Banco Sabadell and Catalonia Bio conference to create teams of scientists and entrepreneurs.
Beyond 3D printing
After two successful fairs, IN(3D)USTRY From Needs to Solutions, the event devoted to the additive and advanced manufacturing ecosystem, returns with the incorporation of other industrial sectors, including robotics, plastic transformers, moulds and dies, plastics and new materials. The event, set to be held in Pavilion 8 of the Montjuïc venue, expects to attract 3,500 visitors. It will be structured around the IN(3D)USTRY Arena, a large innovation area with a stage where representatives of companies which already apply 3D printing to their production processes will present their success stories, challenges and needs to the visitors and companies within the sector.
The fair will be attended by 40 companies using this technology in sectors such as aeronautics, healthcare, industry, cars and retail, such as Siemens, GE Ventures, Adidas, Luxottica, Aciturri, Deutsche Bahn and the European Space Agency (ESA), among many others. The third IN(3D)USTRY fair will also include Ayri11, an industrial automation and robotics congress with around one hundred talks and technical mini-courses designed for professionals from the industry and future robotics experts, Transplast, the subcontracting fair aimed at plastic conversion companies, and the fourth Reshape Awards, focusing on wearable technology and digital manufacturing, as well as an exhibition area with around fifty companies.
Barcelona, 5 September 2018
Communication Area
Fira de Barcelona
Av. Reina Maria Cristina, s/n
08004 Barcelona
Tel. 93 233 20 00
prensa@firabarcelona.com
Previous
Next