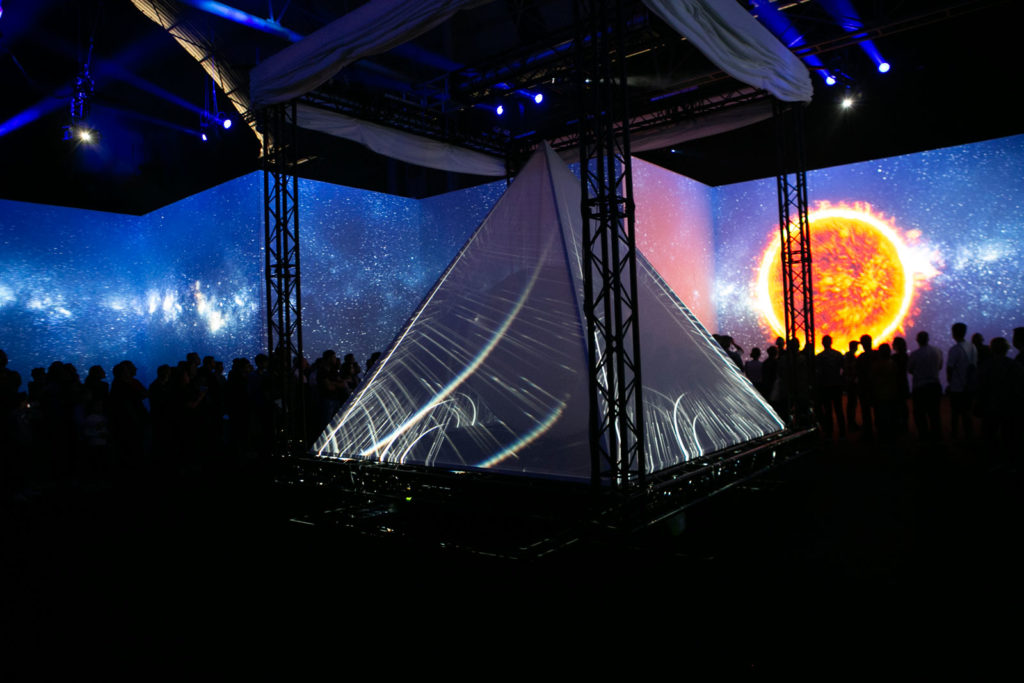 Automobile Barcelona, the International Motor Show organised by Fira de Barcelona, will feature an unprecedented audiovisual show as part of the special centenary programme that will immerse visitors in an interactive journey through the last 100 years of history, automotive, technology and music. The montage is called Genesis and will combine surround sound with 3D and holographic projections on seven-meter-high panels.
For the president of Automobile Barcelona, Enrique Lacalle, this immersive show “is something hitherto unseen. While we are in the middle of the development of the flying car, at Automobile Barcelona we have created a real time machine so that visitors can travel to the past and the future and relive the moments that have shaped our world through images and music in an innovative and exciting way.”
Located in Hall 2 of the Montjuïc venue, with 1,500m2 of installations and hourly passes on the hour, Genesis will take visitors on a journey that starts with the invention of the internal combustion engine in 1860 and looks back at industry milestones such as the construction of the first electric motor vehicle in 1886, the launch of the Ford T in 1908, the invention of drum brakes in 1910, the birth of the 600 in 1957, the development of the Volvo safety belt in 1959, the first airbag in 1971, the incorporation of GPS to the first private vehicles in 1995, and the car speed record with 576 km/h, among others.
These moments in the history of motoring will be intertwined and contextualised with key events in contemporary world and local history, including the 1888 World’s Fair in Barcelona and the First World War (1914-1918), the formulation of Einstein’s Theory of Relativity (1916), the Second World War (1939-1945), the launch into space of Sputnik (1957), May 1968 in Paris, the invention of the microchip (1971), the arrival of the World Wide Web (1990) and the appointment of Nelson Mandela as South African president (1994).
Music will also be the star of the show and will accompany the audiovisual narration with pieces specially chosen to represent each historical moment and its transcendence. Among the 58 selected compositions and songs are works by Erik Satie, Richard Wagner, Claude Debussy, Gustav Mahler, Josephine Baker, Glenn Miller, Elvis Presley, Edith Piaf, The Beatles, The Who, The Rolling Stones, Peret, Pink Floyd, Queen, Depeche Mode, Prodigy, Coldplay, Eminem and Rosalía.
Drawing the future
Genesis will not only be limited to the past, but will show the spectators a possible future sketched out by the technologies that are already transforming vehicles, mobility and the functioning of society in general such as artificial intelligence, autonomous driving, the internet of things, intelligent cities and the conquest of the solar system.
Communication Area
Fira de Barcelona
Av. Reina Maria Cristina, s/n
08004 Barcelona
Tel. 93 233 20 00
prensa@firabarcelona.com
Previous
Next