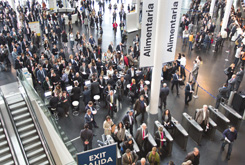 2016, a year of major international events

The Montjuïc and Gran Via venues of Fira de Barcelona are hosting some top-level trade shows and congresses with huge international reach in 2016. It is also the year in which we will be launching new events associated with burgeoning sectors.
The trade fair calendar for 2016 is particularly busy. Standout events include the Mobile World Congress, the biggest global meeting for the mobile communications industry; Alimentaria, one of the biggest trade shows in Europe for the food industry which has now reached its 40th anniversary; and CPhl Worldwide, the world’s leading trade fair for the pharmaceutical sector.
Throughout the year there will also be a series of other major trade shows such as the Smart City Expo World Congress, the international summit on smart cities; Hostelco, the European benchmark for the sector of equipment for the restaurant, hotel and mass catering industry; ibtm world, dedicated to the business and incentive travel industry; and Barcelona Bridal Fashion Week.
During 2016 we will also be hosting the second edition of the IoT Solutions World Congress, showcasing the latest Internet of Things applications, and new editions of the Barcelona Boat Show, Denim Première Vision (jeans fashion), Caravanning, B-Travel and the Sonar Festival.
In addition, three new shows will be launched next year: iWater, on the integral water cycle; Circular Economy, focusing on the reuse of waste and extending the useful life of objects, which will both be held at the same time as the Smart City Expo; and Motoh!, dedicated to the motorcycling world.
Barcelona, December 2015
Communication Area
Fira de Barcelona
Av. Reina Maria Cristina, s/n
08004 Barcelona
Tel. 93 233 20 00
prensa@firabarcelona.com
Previous
Next