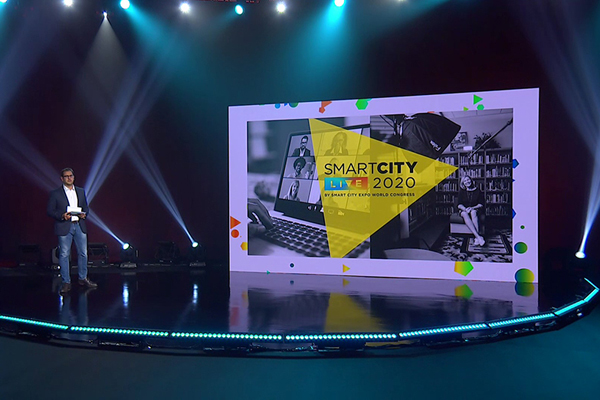 Smart City Live (SCL), the digital edition of the Smart City Expo World Congress (SCEWC), will have an innovative platform that will broadcast the conferences and presentations of the new event live and with television production, which can also be accessed via a Video-on-Demand system. To achieve this goal, Fira de Barcelona has reached an agreement with Mediapro Group for the creation of a major digital platform with audiovisual content to last beyond the event as a reference in the knowledge and debate of the main challenges of cities and urban innovation.

Between November 17 – 18, Smart City Live will bring together, in virtual format due to the current situation, the main protagonists, institutions and international experts on smart cities in a new virtual and interactive proposal structured in two blocks: a TV program broadcast live on the first day, and a second program to  host workshops and parallel events online, which will also be distributed on the platform in a range of different formats.

In this sense, The Mediapro Group, a reference in the European audiovisual sector, will be in charge of developing and operating the technological platform for the distribution of Smart City Live content both during the event and throughout the year, as well as the production of other content on the platform. The event will therefore boast a live broadcast system and a VOD (Video on Demand), or television on demand system, so that registered participants can watch presentations, conferences and other audiovisual content both live as well as after the event has concluded.

In addition, the program of conferences and workshops will be recorded in a large studio of more than 500 m² located at the Mediapro building in the 22@ district in Barcelona, ​​which will become a television studio for the creation live and VoD content during the two days the Smart City Live congress lasts. This content will be televised and will be recorded and broadcast using the very latest technology.

The director of SCEWC, Ugo Valenti, highlighted that “In such complex times, Smart City Expo World Congress, takes another step as leader in smart city event. Our goal is for the new Smart City Live platform to become the basis of a knowledge hub on smart cities and a benchmark in the global distribution of content. Having the experience and technology of Mediapro is for us a guarantee to continue growing and innovating”.

The Director of Innovation and New Business at the Mediapro Group, María Carmen Fernández, stated  “innovation in the digital world has a lot to do with the generation of relevant content, but also with the multi-channel, interactivity and usability with which it is offered to the end consumer. Smart City Live has an excellent opportunity to position itself globally for all consumers of specialized content in smart cities and, as a partner of Fira de Barcelona, ​​Mediapro will bring all its experience to bear on this project to achieve this”.

New 365 platform
This platform will also promote the new SCEWC Tomorrow.City initiative, specifically designed to offer companies and government bodies the resources in technology, training, research and investment throughout the year. As such, the platform will enjoy the most innovative technological tools to accelerate the promotion of sustainable and inclusive cities through four different areas of action: knowledge, business, training and talent, and dissemination.