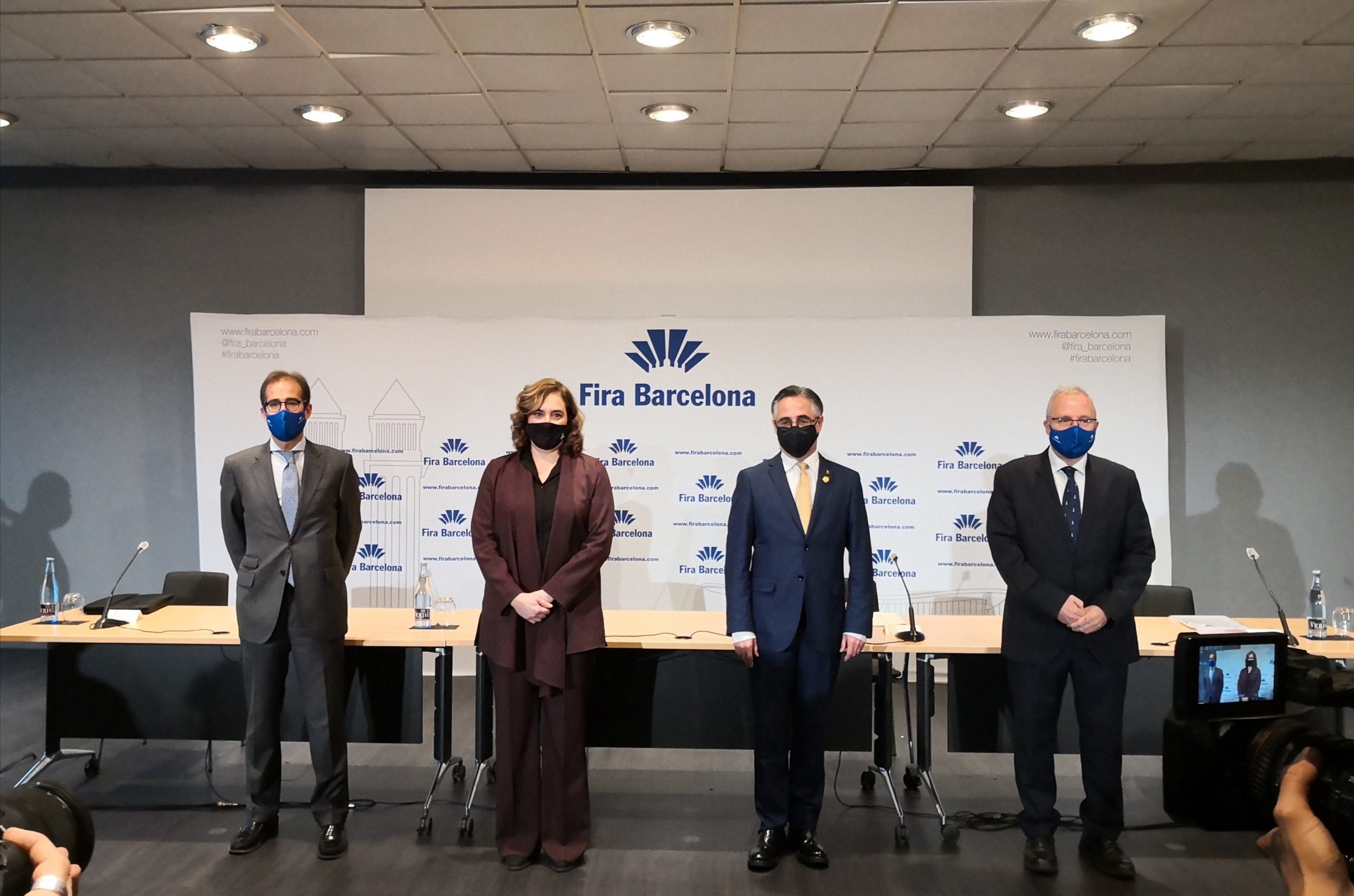 The institution, which has an impact of 4,7 billion euros, will be again a significant economic and social driving force

Following a year marked by the effects of the COVID-19 pandemic on trade fair and congress activity around the world, Fira de Barcelona is preparing to resume face-to-face activity with all the required safety measures, particularly from spring 2021 onwards, with major international events and leading trade shows such as Alimentaria, MWC Barcelona and ISE. The institution will thus once again become a powerful economic and social driver within the territory, contributing to the much-needed reactivation of the industrial fabric.

This plan was covered today at the meeting of Fira’s General Council, chaired by Ada Colau, the Mayoress of Barcelona, and attended by its Vice-Presidents, Ramon Tremosa, Minister for Enterprise and Knowledge of the Government of Catalonia, and Joan Canadell, President of the Barcelona Chamber of Commerce. Pau Relat, Chairman of the institution’s Governing Board, and Constantí Serrallonga, its General Manager, also presented the economic results for 2020, with income totalling over 80 million euros, and highly conditioned by the impossibility to proceed with the event calendar due to the pandemic, which forced the postponement until 2021 of the vast majority of shows initially scheduled and the implementation of a strict cost containment policy.

Pau Relat stated that “we’re looking towards 2021 with optimism, with the confidence that we’ll progressively resume our activity, seeking to once again become an important tool to contribute to the recovery of the country’s productive and social fabric”. In addition, he highlighted that “the safety and prevention protocols we’ve developed, together with the advances in treatments, vaccines and rapid tests, may be the keys to the reactivation of international mobility and the trade fair sector”. Relat also wanted to underline the social commitment displayed by Fira during the worst months of the health crisis, during which it assigned its halls and donated food to several entities.

General Manager Constantí Serrallonga, remarked that “it’s been a difficult year for the whole industry, but we’ve adapted with the holding of face‑to‑face events, whenever possible, and we’ve also made progress with the development of digital formats, which will provide an excellent complement to our fairs in the future”. After emphasising the results achieved under these difficult circumstances, he pointed out that “Fira’s stability and solvency will enable it to overcome the challenge of the current situation and make us better prepared for next year”.

International benchmark
The institution is working on the progressive normalisation of the event calendar in 2021, especially from next spring onwards, with the holding of major international and professional shows at the Montjuïc and Gran Via venues, in addition to its activity in other countries. The face-to-face format, to which all the safety and prevention measures featured in the detailed protocol drawn up by Fira with the advice of the Hospital Clínic in Barcelona will be applied, will be complemented in many cases through its digital side, in order to extend its international reach and impact.

Particularly relevant are the planned holding of Alimentaria from 17 to 20 May, bringing together one of the largest ranges of products from the European agri-food industry; ISE, the world’s most important audiovisual industry exhibition, set to be held in Barcelona for the first time from 1 to 4 June after being organised in Amsterdam until now; and MWC Barcelona, the largest international event for the mobile communications ecosystem, organised by GSMA, which will take place from 28 June to 1 July.

In addition, Fira is also preparing other important trade shows such as Hispack and Alimentaria FoodTech on packaging and food technology; Smart City Expo World Congress, the leading event for smart urban solutions, Piscina & Wellness, which will take place together with Barcelona Building Construmat; IOT Solutions World Congress, focused on the Internet of Things; Expoquimia, Eurosurfas and Equiplast, the three major events for applied chemistry; or BforPlanet. 2021 will also feature other shows that have become benchmarks for the institution, including Automobile Barcelona, Barcelona Bridal Fashion Week, the Saló de l’Ensenyament and Futura, Boat Show, Caravaning, Gastronomic Forum Barcelona, Bizbarcelona, the Saló de l’Ocupació and B-Travel.

As for its activity abroad, next year Fira plans to co-organise Smart City Expo in Mérida (Mexico), Santiago de Chile, Curitiba (Brazil) and Atlanta (USA), together with the Piscina and Alimentaria events in Mexico and the Renewable Energies and Transport and Logistics fairs in Cuba. It will also continue to work on the design and management of exhibition venues in China.

Results and cost containment
The General Council assessed Fira de Barcelona’s results for 2020, which, as in the case of most companies, have been affected by COVID-19 due to it being impossible to hold a normal trade fair activity. The institution expects to close the year with income totalling 82 million euros and a positive EBITDA of 100,000 euros as a result of corporate events of SAP and Cisco, as well as the Barcelona Wine Week, held before the outbreak of the pandemic, and, subsequently, the face-to-face and hybrid formats of BizBarcelona, the Saló de l’Ocupació, FHG Forum (food) and the digital editions of FiraCampusVirtual, Valmont Barcelona Bridal Fashion Week, Liber and Smart City Live. There have also been several forums and webinars from different shows and the virtual versions of Smart City Expo Latam (Mexico) and Smart City Expo Santiago de Chile.

Constantí Serrallonga explained that this turnover, given the circumstances, has also been possible as a result of the invoicing of different services to several organisers and customers which materialised before the cancellation or postponement of the events, due to the forward planning through which they are prepared. He also stressed that “given the exceptional nature of the current times, these results cannot be compared with those of previous years” and he underlined the significant efforts to contain costs applied by the institution, including a flexible furlough scheme for all employees with varying degrees.

Economic driver and future projects
When it resumes its activity in 2021, Fira de Barcelona has set a prudent target of obtaining income totalling over 125 million euros and becoming a new economic and social driving force for companies, especially SMEs, and the country. In this regard, it should be noted that, within the context of its full trade show activity, the institution generates an annual economic impact of 4,710 million euros, with a Gross Added Value (GAV) equivalent to 1% of the Catalan GDP, 35,000 jobs and 971 million euros of tax revenue, according to a study conducted by the Barcelona Institute of Economics (IEB) of the University of Barcelona (UB) focusing on 2015-2019. In the latter year of this period the revenue totalled almost 220 million euros and the EBITDA amounted to nearly 25 million euros.

In 2021 it will continue to develop its Gran Via venue extension plan, which will entail a 25% increase in its current surface area and allow the growth of the existing trade shows and the attraction of new events. In this regard, the UB’s study estimates that there will be an impact totalling an additional 675 million euros per year between 2024 and 2028, to which we must add a further 211 million euros during the period of the construction of the new facilities, which are expected to be completed by 2024. For its infrastructure and innovation plans Fira is seeking to draw on the European Next Generation EU recovery funds.

On the other hand, at the end of next year Fira de Barcelona will take over the management of the CCIB (Barcelona International Convention Centre), which, with 100,000 square metres and more than a hundred events a year, will strengthen Barcelona’s global strategy for shows and congresses by enabling the comprehensive development of the city’s different exhibition facilities.