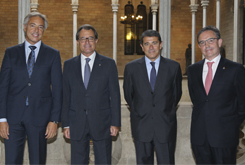 ITMA, the world’s biggest trade show of machinery for manufacturing textiles, clothing and raw materials, will be held once again at Fira de Barcelona’s Gran Via Exhibition Centre in 2019. The event, which was previously held at the Fira in 2011, took over the whole trade show venue and brought together more than 1,000 exhibitors and 100,000 visitors from 150 countries.

The candidacy presented by Fira de Barcelona at the initiative of AMEC AMTEX, the Spanish Association of Textile and Clothing Machinery Manufactures, won the bid ahead of other major European cities.

ITMA is a touring trade show with more than 60 years of history and is held every four years. It attracts extremely high calibre visitors, especially top executives, and has established itself as the meeting of reference for the sector on a global level. It is organized by CEMATEX (the European Committee of Textile Machinery Manufacturers), an organization made up of nine European sector associations, including AMEC AMTEX.

After the excellent response to the event in 2011, ITMA will be repeating a venue for the first time, returning to Fira de Barcelona for the second time in eight years. The venue, its organizational and management capacity, the forthcoming opening of Line 9 of the Barcelona Metro, its power as a consumer motivator, the dynamism of the regional textile machinery sector and the huge appeal of the city of Barcelona were key factors in winning this important event for the city once again.