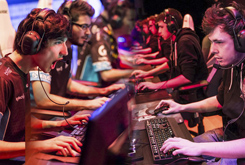 The video games show Barcelona Games World (BGW), organised jointly by the Spanish Videogames Association (AEVI) and Fira de Barcelona, will take place for the second time between 5 and 8 October in the Montjuïc Exhibition Centre. The show is aimed at consumers and professionals, and will be expanding in size and feature the presence of leading brands in the sector, thereby consolidating its position as the largest video game event in Spain and positioning itself as an international benchmark. The Show will be the setting where Spanish enthusiasts can enjoy the latest ideas in the sector for the first time.

Following the success of its first year, BGW will be expanding its exhibition area to more than 60 thousand square metres (an increase of over 10% compared to 2016) in order to improve the organisation of its content, accessibility to them and the gaming experience. To do so, it will be redistributing its spaces and will allocate halls 1 and 2 of Fira de Barcelona’s Montjuïc Exhibition Centre to presenting and testing new products before the public, while the eSports competitions will move to the Conference Centre, which will have 2 stages. The largest of these will have a capacity for more than 1,000 attendees.

BGW will also enhance the professional area and networking activities with Games Pro, a comprehensive programme of lectures and business meetings that will include academic guidance, professional development and employment opportunities.

After last year’s encouraging attendance figures and based on the feedback received from visitors, the event organisers will be reinforcing both security and accessibility to the site to provide a better experience for visitors. More space will also be allocated to restaurants, with all of Plaza de l’Univers given over to restaurant facilities, with a large area with tables for over 4,000 diners. Further information about this year’s BGW will be provided over the coming months, on the official website and also via Twitter, Facebook and Instagram.

The first edition of BGW exceeded all the initial expectations, with all the leading brands in the industry attending and all tickets sold out, and the event was attended by 121,980 visitors, a record for a video game event in Spain.