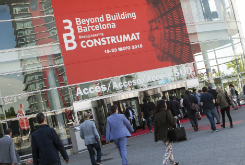 At the start of a new era, the show drew the outlines of the future construction industry of the 21st century

Beyond Building Barcelona-Construmat, the updated International Building Show of Fira de Barcelona, closed its nineteenth edition having showcased the vectors that will define the future of the construction industry in the 21st century: innovation, design, sustainability and building renovation, and having consolidated itself as a platform for international business and support for the sector. The event served to underline the start of an economic recovery in the Spanish construction sector which is finally managing to glimpse an end to the deep recession it has been immersed in for the last seven years.

In this respect, the show’s president, Josep Miarnau, expressed his “satisfaction for the fact that both the show and the sector seem to be entering a recovery phase after some frankly very tough years.” Miarnau expressed his “gratitude to all the exhibitors and visitors who took part and who found at this new edition of the event an opportunity to do business and a guide for getting back on track after these long and challenging years of the crisis.”

Fira de Barcelona’s International Building Show structured its offering around the key areas that will be defining the direction of the construction industry in the coming years. In this respect, the themed areas and conferences on digital technology in construction received the most visitors and are set to be an almost essential element in the construction industry of the future. 3D printing, the Internet of Things, robots and drones were the star turns of the event. Other key themes at the show, such as design and building renovation, also aroused a great deal of interest, not only among trade professionals but also the general public who were given access to the last two days of the trade fair.

This year the show also made a particular effort to provide a platform for international business. The national and international Contract Forum were the venues for the presentations of a total of 217 initiatives (145 international and 72 national) in search of suppliers and partners among the 300 exhibitors who took part in this edition of Beyond Building Barcelona-Construmat. At the Forum almost 330 business meetings took place, while in the Job Market Place, organised by Barcelona Activa, twelve job interviews were held; at the Brokerage Event there were 284 contacts made and in the advisory area on internationalization and financing PIMEC provided consultancy services for 24 queries from companies. In total, this edition of BBB-Construmat hosted some 710 networking meetings.