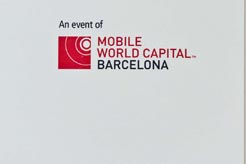 The members of the Mobile World Capital Barcelona (MWCapital) Advisory Board took have taken part in the first meeting of this new body which was established today in Barcelona. The board is made up of highly recognized representatives of the mobile technologies and solutions industry from the five continents that will meet regularly to design the industrial agenda and activities of the Capital.

The members of the Advisory Board, which were received by the Mayor of Barcelona and president of the Mobile World Capital Foundation Barcelona, Xavier Trias, had an intense first meeting in which they defined their objectives and work plan. The creation of this body was approved last July by the Board of the MWCapital and will initially have 11 members, a number which may be extended up to 20, all of them unpaid.

Its functions are to assist in the strategic design of the MWCapital’s long term projects, spread its messages and goals internationally and create and lead different groups of experts to advise the pillars and initiatives within the MWCapital. To this end, the Advisory Boards members have very diverse and complementary backgrounds that will enable them to actively take part in the MWCapital’s programs and activities, both industrial focused and socially oriented.

About the Mobile World Capital Barcelona
Mobile World Capital Barcelona is an initiative aimed at turning the city into the permanent global centre of mobile technologies, where people, companies and institutions work together to exploit the potential of mobile technologies as an element to transform daily life and create new business opportunities.

Promoted by the Ministry of Industry, Energy and Tourism, the Generalitat de Catalunya, the Barcelona City Council, Fira de Barcelona and GSMA ¿ that represents the interests of over 800 mobile phone operators worldwide and over 2000 companies in the mobile ecosystem ¿, is based on four pillars: MWHub and MWCongress, concerned with industrial and business development, MWCentre and MWFestival that impact people and their social life.
Barcelona, October 5th 2012