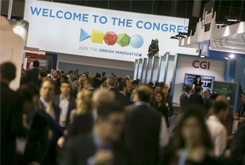 Istanbul to host a regional Smart City summit in 2016

The smart city summit organized by Fira de Barcelona, Smart City Expo World Congress, closes this afternoon its best edition so far. The 2015 event brought together some 500 cities from the five continents, 465 exhibitors and over 400 speakers. At its fifth edition, the event was jointly held with BcnRail, the International Railway Industry Trade Show, and registered some 14,000 attendees.

The show’s director, Ugo Valenti, said “these figures confirm beyond doubt that the Smart City Expo World Congress has established itself as the leading international event for urban innovation and solutions. There is no other event in the world capable of attracting so many companies and cities and so much talent.” Furthermore, Valenti added that “urban transformation is one of the big challenges we are facing in the immediate future, and this event aims to provide a useful and practical tool for promoting collaboration between cities and also with private companies as well as sharing knowledge and experiences. The fact that Barcelona is able to contribute to such a vast project makes us very proud.”

Next stop, Istanbul
On the last day of the summit it was announced that Istanbul will be hosting a regional edition of the Smart City Expo. The Turkish capital, traditionally a bridge of cultures, will play this same role in the field of urban innovation in April 2016. This was announced by Fira de Barcelona and the city council of the Turkish capital after signing an agreement to hold the event. There will also be Smart City Expos in 2016 in Puebla (Mexico) in February and in Kyoto (Japan) in June.

World Smart City Awards
Last night the event awarded the city of Peterborough (United Kingdom), the Hebei Digital Education Center (China) and the Findeter initiative (Colombia) in the categories of City, Project and Innovative Idea respectively. The choice of Peterborough recognizes one of the four urban laboratories in which the projects of the UK Future initiative are being rolled out. The British city’s firm commitment to becoming the environmental capital in the United Kingdom, as well as being the first town to implement circular economy strategies and a model of citizen participation (bottom-up collaborations) convinced the jury of the awards.

Meanwhile, the Hebei Digital Education Centre in the city of Shijiazhuang (Hebei province, China) won the Project category for its commitment to modernizing education through community learning and the development of a platform of Cloud-based education services, while the Innovative Idea award was won by Findeter, a bank for developing sustainable infrastructures in Colombia.

On the other hand, the Swedish startup mapillary that allows users to capture, share and explore images of any place to build virtual maps was the winner of the urban edition of 4YFN Awards, which registered 120 entries.

The Smart City Expo World Congress will be back at Barcelona’s Gran Via venue in November 2016 for its sixth edition.