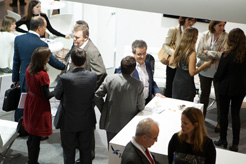 Pharmaceuticals based on genetic analysis will provide better treatment of disease

PharmaProcess points out personalised and biotechnological medicine as a future trend

According to what was revealed at the first edition of PharmaProcess Forum, which was held on October 29th and 30th in the Palacio de Congresos in Fira de Barcelona’s Montjuïc exhibition centre, personalised medicine, based on biotechnology, and ending the circulation of falsified pharmaceuticals are the two major challenges faced by the world pharmaceutical industry.

Biotechnology has been one of the main focuses of the forum, the first one on the pharmaceutical industry to be organised in Europe. The manufacture of medicines using cellular and molecular biology has been revealed as a major trend for this industry’s future, fundamental for maintaining human wellness.  According to the President of the Asociación Española de Farmacéuticos de Industria (AEFI), Beatriz Artalejo, “medicines of the future are already here. They are treatments personalised for each patient according to their needs and are based on genetic characteristics”.

In this sense, the President of the International Federation of Pharmaceutical Manufacturers and Associations (IFPMA), Eduardo Pisani, highlighted the role of the “biopharmaceutical industry” as responsible for “saving lives on an epic scale” in recent decades.

Another challenge to be faced by the world pharmaceutical industry is the control of falsified medicines, especially those sold on the net. On this subject, the Director of the Agencia Española de Medicamentos y Productos Sanitarios (AEMPS), Belén Crespo, revealed that “between 7 and 10% of medicines found on the Internet are fake” and went on to say “the only medicines that have passed all controls that allow them to be marketed are those sold in pharmacies”.

The majority of addresses highlighted how important innovation is for the sector to be able to face the current situation. Eduardo Pisani revealed in PharmaProcess that the sector worldwide invested over 120 billion dollars in 2012 compared to 45 billion in 2001 in “new medicines, this industry’s lifeblood”.

The President of the Organising Committee of PharmaProcess, Ton Capella, said he was “very satisfied with the results of the first edition of the forum, which has surpassed initial forecasts with 200 attendees, around 800 trade visitors, 55 speakers and 50 exhibitors.