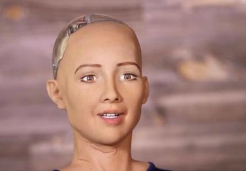 Featuring round tables on the convergence of Blockchain, robotics, artificial intelligence and the IoT

In just under two weeks, the humanoid robot Sophia will be travelling to Spain for the first time to visit the IoT Solutions World Congress and take part as a panellist on two round table of the Blockchain Solutions Forum, an activity that forms part of the event on the industrial internet of things being organised by Fira de Barcelona. On 4 October, at the Gran Via exhibition centre, Sophia and other experts will be discussing the exciting future for humanity augured by the convergence of emerging technologies such as blockchain, artificial intelligence, robotics, 3D printing and the Internet of Things.

Far from being a product of science fiction, Sophia already embodies all the possibilities of this connected future that is just around the corner. In her presentation on Blockchain Solutions Forum, the sophisticated automaton will uphold the advantages that artificial intelligence and robotics, in particular, can bring to people’s everyday lives.
This special silicone-skinned robot full of sensors, with a human appearance inspired by Audrey Hepburn and the wife of her creator, David Hanson, is capable of producing up to 62 highly realistic facial expressions. For example, she can blink, smile, frown and evince surprise, amongst other gestures. Sophia has cameras in her eyes and thanks the software of her brain and various data analysis algorithms she can recognise faces, make eye contact, remember faces, interact, identify voices and hold conversations in a very natural way. Hanson Robotics, the company that gave life to Sophia, hopes that in a few years’ time machines will also manage to become ‘emotionally intelligent’.
On her visit to Fira de Barcelona, Sophia will share her opinions and discuss with the panel of experts in emerging technologies the social, economic and even political implications of the generalisation of blockchain, artificial intelligence, automation and the Internet of Things. The round table at 4.00pm on 4 October will be chaired by the Head of Research and Partnerships of Outlier Ventures, Lawrence Lundy. The other panellists are the artificial intelligence specialist and CEO of SingularityNET, Ben Goertzer and the researcher and author of the book “Robots will steal your work, but that’s OK. How to survive the economic collapse and be happy”, Federico Pistono. Before that, at 2.30pm, Sophia will also be taking part in a round table on convergence and crypto-economics together with Convergence CEO VC and CEO Outlier Ventures, Jamie Burke.
However, Sophia’s attendance of the Blockchain Solutions Forum will not be limited to her participation in this round table. Before returning home to Hong Kong, the humanoid robot will spend 3-4 October visiting the IoT Solutions World Congress trade show to learn about the IoT and blockchain solutions being presented by the 240 exhibitors at this year’s edition, including some of the world’s leading developers of these technologies.
The IoTSWC is one of the eight events that make up Barcelona Industry Week, the biggest platform for the industry, which takes place at Fira de Barcelona’s Gran Via venue on 2-6 October and involves the convergence of the trade fairs of Expoquimia, Eurosurfas, Equiplast and In(3D)ustry From Needs to Solutions, the World Congress of Chemical Engineering, the World Chemical Summit and the Smart Chemistry, Smart Future event.
Barcelona, 26th September 2017
Communication Area
Fira de Barcelona
Av. Reina Maria Cristina, s/n
08004 Barcelona
Tel. 93 233 20 00
prensa@firabarcelona.com
Previous
Next