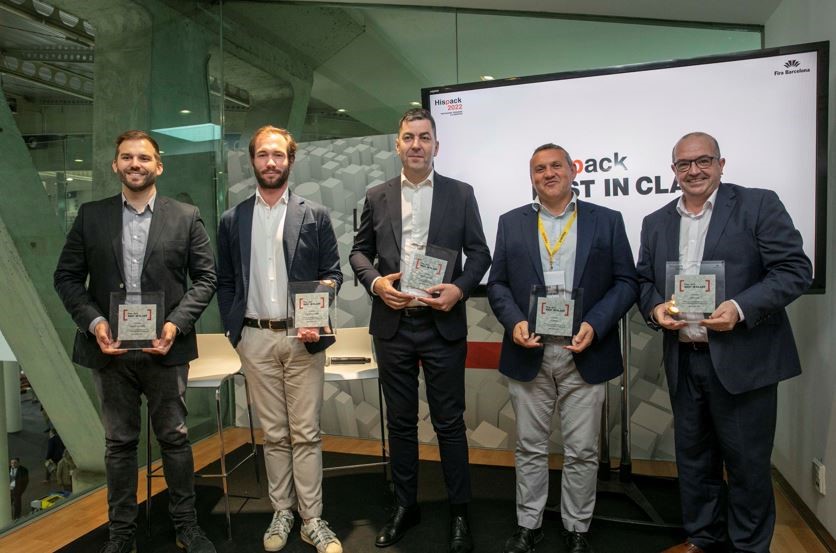 The Spanish trade show presents the "Best in class" programme as example of business transformation thanks to packaging.

A pack for growing and exporting sprouts, a system for filling reusable cosmetic containers in the same shop, collaborative robots for packaging pharmaceutical micro-cultures; manufacturing of packaging, packaging and traceability from the first moment of salmon fishing; and a production, packaging and preservation line for ice cubes in different formats. These are the five international projects chosen by Hispack’s “Best in Class” programme, which recognises companies that, thanks to packaging innovation, have managed to multiply their efficiency, access new markets or transform their business model. The cases presented today at the Spanish trade show, organised by Fira de Barcelona, come from Denmark, England, Germany, Scotland and the Faroe Islands.

Hispack, as the leading platform for the packaging sector and with the aim of highlighting the role of packaging as a driver of innovation in different business areas, has launched this year the “Best in Class” programme, through which it has selected five European industrial projects in which packaging has played an important role in transforming both production processes, distribution, sale or use of products, as well as business or communication.

Today, within the framework of the trade fair, representatives of these five companies have been given a voice in an exclusive conference in which the protagonists have explained in more detail the packaging solutions applied and the results obtained. They were then recognised by Hispack as an inspiring example for other companies in their sectors in a workshop attended by Hispack President Jordi Bernabeu and Hispack Director Xavier Pascual.

Outstanding in innovation
The Danish company GrowUp Farm, dedicated to the cultivation and selling of sprouts, has been recognised for having transformed its proposal for the production, presentation and sale of the product by means of a new packaging format. Under the slogan “Eat, grow, repeat”, the innovative packaging solution, implemented in collaboration with Schur Star Systems, allows customers to grow their own sprouts at home, using the same container as the sale. For the company, this system led to a rapid increase in sales and the start of exports.

For its part, the British cosmetics multinational “The Body Shop” has relaunched on a global scale an internally developed proposal already devised and used in the 1970s that is based on the reuse of packaging in the interests of improving sustainability: this is the Refill Station, an in-store dispenser through which customers can refill their own containers with the desired product.

In Scotland, the manufacturer of micro-cultures for the pharmaceutical and cosmetics sectors, E&O Laboratories, has implemented state-of-the-art collaborative robots from Universal Robots, through local integrator Olympus Technologies, to automate the end of line packaging, increasing safety, accuracy and speed in the handling of these sensitive products. This improvement in efficiency and productivity has resulted in a significant increase in market share.

Bakkafrost (Faroe Islands), one of the largest international companies in the aquaculture sector, has developed its own packaging manufacturing line by adding a laser coding and printing system supplied by the Spanish company Limitronic and integrated by MP Teknik to achieve full traceability that connects the manufacturing, distribution and marketing of its products while generating brand value. The Faroese firm produces one million pieces of salmon a day that are packaged, coded and ready to sell from the moment they are caught.

Finally, the German company Ice Age Ice has been recognised for demonstrating how seamless automation of the manufacturing and packaging process is key to adding value to a product and increasing sales, even when it comes to ice cubes. Thanks to the efficient packaging solutions provided by the Spanish company Coalza Systems, the German company is the market leader in this product category, supplying all types of formats.

Chile, also “Best in class
The Hispack “Best in class” programme has dedicated special recognition to Chile, as the guest of honour at this year’s edition of the trade show. The Chilean packaging sector is one of the most dynamic in Latin America, driven by the strategy outlined for the next decade that emphasises exports, especially in the food (fruit, fish and seafood) and wine sectors, and in which packaging plays a key role.

Yesterday, during the official reception of the Chilean trade mission led by the Chilean Packaging Centre (CENEM) and attended by the Consul General of the Chilean Government in Barcelona, Jaime Ferraz, the dynamism and commitment to innovation in packaging of various industrial sectors of the country was recognised.

Liderpack Awards ceremony
On the other hand, this afternoon Hispack will host the awards ceremony of the Liderpack-Popai Spain Awards corresponding to the 2020 and 2021 editions. Eighty-one Spanish packaging and Point-of-Sale Advertising works that have stood out for their innovative design and that have sustainability as a common denominator will be honoured. Some of the packages are made of paper with barrier properties for foodstuffs, side-covered containers useful for removing codfish, boxes with wine bottles integrated into ice buckets, packaging for beer made of cardboard, or bottles made of 100% recycled and recyclable plastic, among other products.

Hispack 2022
These awards were presented at Hispack, the sector’s leading trade fair, which this year brings together 640 direct exhibitors and 1,100 brands represented to showcase concrete results and new applications in sustainability, digitalisation and the experience of packaging use. The current edition is held in conjunction with Graphispag, the trade fair for the graphic industry and visual communication, which showcases the latest graphic technology, inks, finishes and materials for printing all types of sustainable, personalised and high value-added graphic products. Both shows are open at Fira de Barcelona’s Gran Via exhibition centre until Thursday.