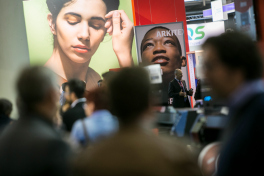 The presence of professionals buying printing applications is on the up

There was a feel-good atmosphere as Graphispag drew to a close; the show more than met the expectations raised while demonstrating that the graphic communication market is recovering and has huge creative and business potential ahead of it. The exhibitors were satisfied with the quality of the contacts made and with the visits by clients from all over Spain with specific projects, which could lead to new sales for them in the coming months. The participating firms also highlighted the fact that the presence of professionals from other demand sectors was greater. And the visitors positively valued the show’s offerings, content and new direction, focusing on new printing applications.

Slightly higher than the 2015 figure, Graphispag recorded 22,050 professional visits, 5% of which were international and mainly from Portugal—accounting for 35% of foreign visitors—followed by Italy, France, Andorra, Germany and the United Kingdom. Beyond Europe, the highest numbers of professional visitors came from Turkey, Algeria and Morocco.
Regarding national visitors, there was a notable increase in the numbers of professional visitors with decision-making or purchasing power who came mainly from Catalonia, Madrid and the Valencian Community. Professionals from Andalusia, Aragon, Galicia and other regions of Spain also attended, confirming once again that Graphispag is the prime show for the Spanish graphic communication industry.
According to the registration system data, 36% of visitors are involved in graphic services, 17% in the sphere of design and communication, and 23% in other industrial areas (packaging, textiles, promotional items, furniture and decoration, construction, etc.). The presence of end users such as decorators, interior designers, retailers, publicists and professionals from the hospitality, publishing and fast moving consumer goods, among others, increased due to the Graphispag Live space, where many graphic and visual communication possibilities could be seen.
Optimism
Graphispag 2017 brought together 350 brands of graphic machinery and technology, as well as finishes, software, media and printing materials. Heidelberg, Agfa, Digidelta, Epson, HP, Roland DG and Mactac were the partners for this edition, which had exhibitors from 12 countries.
The firms were satisfied with the quality of the visitors, the influx of professionals from all over Spain, the commercial contacts made and the signing of numerous orders at the show itself. Lluís Giralt said that ‘an atmosphere of greater optimism within the sector was certainly apparent, as was the desire to seek specific solutions to create new printing services and applications, and the presence of other business models too’. Likewise, the president of the show stated that, thanks to technology, ‘the graphic communication market is expanding to include professionals from other sectors that Graphispag was not used to, and this is a major achievement because it makes the demand for applications grow’.
Graphispag Live, a new collaborative model
The director of Graphispag, Xavier Pascual, was satisfied with the good results and with the opinions gathered from exhibitors and visitors, which support Graphispag’s new positioning. Pascual explained that ‘in the show, we have implemented a model of collaboration across the entire value chain of the printed product, involving technology and media manufacturers and distributors who have been our partners, while at the same time including graphic services firms and new demand groups related to packaging, retail and the publishing and textile industries in this edition, these specialist sectors were selected because of their potential’. In this respect, the show will continue to create spaces for relations and business between editions so that the creative and business possibilities of printing can continue to be spread.
The Graphispag Live printing applications showroom was well received, as were the different knowledge, demonstration and networking activities carried out.
More than 2,500 people attended the 40 talks held at Graphispag. These talks addressed different issues related to the graphic business and focused on experiences, technology and solutions for improving printing in the retail, textile, packaging and publishing industries. They were given by firms and professionals who had put them into practice. Twenty-eight workshops were held in parallel, with 230 participants.
Guided tours around the showroom were another feature of Graphispag Live. Twenty-five tours were organised for 550 people from different lines of business. Finally, it was demonstrated that Graphispag is a show for designers too. This group actively took part in the guided tours and in the Adobe Masterclass sessions.
Other events
Graphispag was the setting for the Líderpack Awards for Packaging and PoP Displays, the Anuaria Graphic Design Awards and the Letra Awards for Visual and Graphic Communications in Spain and Portugal. The various winners of the 2016 editions of these awards were also at the show: they are considered the benchmarks in our country in their respective specialist sectors.
Likewise, the show paid tribute to the trajectories of firms, organisations and people linked to the graphic industry, and an event was held to thank the partners and organisations that collaborated in this edition.
The next edition of Graphispag will take place from 26 to 29 March 2019.
Barcelona, March 2017
Communication Area
Fira de Barcelona
Av. Reina Maria Cristina, s/n
08004 Barcelona
Tel. 93 233 20 00
prensa@firabarcelona.com
Previous
Next