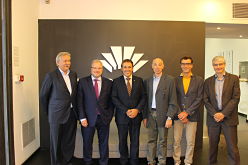 With the aim of reinforcing the Hispack and Graphispag shows

Fira de Barcelona and the Graphispack Association have renewed their partnership agreement in order to continue their work to support and promote the graphic industry and the packaging sector by means of the Hispack and Graphispag trade fairs, as well as the synergies generated by the two entities.
Since the signing of the initial agreement in May 1979, the Graphispack Association and Fira de Barcelona’s Hispack and Graphispag fairs have maintained a close degree of cooperation, as reflected in the organisation of activities within the framework of the events. With the recently signed renewal agreement, set to remain in force until 2027, emphasis will be placed on promotion and impetus within the domestic and international contexts.
The signing of the extension of the agreement, which took place on 16 July at Fira de Barcelona, was attended by Constantí Serrallonga, managing director of Fira de Barcelona, Jordi Quera, president of Graphispack Association, Javier Riera-Marsá, vice-president and president emeritus of Hispack, Jordi Magre, director of the Graphispag fair, Ignasi Cusí, general secretary of the association, and Xavier Pascual, director of Fira de Barcelona’s Packaging, Printing and Retail Business Unit, among other representatives of the trade fair institution.
Fira de Barcelona’s managing director expressed his satisfaction with the “renewal of Fira de Barcelona’s commitment with the Graphispack Association, a key ally of the Hispack and Graphispag shows when it comes to promoting and revitalising the business of the graphic and packaging industries, two powerful synergy-creating sectors undergoing a process of digital transformation”.
As for Jordi Quera, president of the Graphispack Association, he said that “we’re very proud to renew our cooperation agreement with Fira de Barcelona, so as to continue pooling efforts and resources on behalf of the growth of two very important productive areas that share the same industrial environment”.
Two flagship trade fairs
Hispack is the benchmark trade fair for the Spanish packaging industry and one of the leading shows in Europe in its speciality. The last event, held in May 2018, brought together more than 1,500 companies and focused on the role of packaging as an economic driving force and a key element for innovation and the transformation towards Industry 4.0.
Graphispag, the leading graphic fair in the domestic and European scenes, will be held in March 2019, bringing together a wide range of printing media and technologies and finishes with which to create graphic products for all kinds of economic sectors and showcasing the trends defining the transformation of the graphic industry. The last event in 2017 gathered together more than 350 brands and received more than 22,000 visits from professionals.
For its part, the Graphispack Association is the business entity that, over the past 40 years, has grouped together the main manufacturers and suppliers in the graphic industry and the packaging, wrapping, POS display, bottling and related sectors in Spain, promoting and actively participating in the organisation of Fira de Barcelona’s Hispack and Graphispag shows.
Barcelona, July 2018
Communication Area
Fira de Barcelona
Av. Reina Maria Cristina, s/n
08004 Barcelona
Tel. 93 233 20 00
prensa@firabarcelona.com
Previous
Next