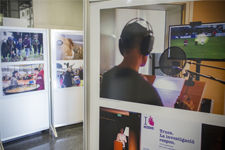 The exhibit can be seen until 20 December at the Montjuïc

Fira de Barcelona collaborates one more time with the different initiatives of TV·’s La Marató. Besides letting Hall 1 of the Montjuïc venue as the main call centre for donations during the program, Fira is also hosting the photographic exhibition “A look at the values of La Marató” until December 20th, a display which can also be seen in Girona, Tarragona and Lleida.

The images were all taken by students of the Institut d’Estudis Fotogràfics and features stills that evoke the universe of values surrounding the project and the people involved in it honoring them. Concepts like effort, solidarity, emotion and trust inspire an exhibit that aims to translate to images the power and the values that drive year after year, a telethon that in 2015 will be dedicated to diabetes and obesity.