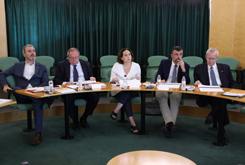 The General Council of Fira de Barcelona expresses satisfaction with activity in the first half of the year, with 33 fairs held on its venues and eight abroad

The General Council of Fira de Barcelona has expressed its satisfaction with it activity in the first half of 2017, with over thirty fairs and conferences held at the Montjuïc and Gran Via venues, plus eight jointly organised events in other countries. Fira de Barcelona’s calendar in the second half of the year includes key international events linked mainly to new industries, healthcare and technology. Thanks to this high level of activity, Fira anticipates strong results for 2017, reinforcing its position as a top European venue and its role in driving the region’s social and economic progress.
The financial statements for 2016 were approved at today’s meeting, which was presided over by the mayor of Barcelona, Ada Colau, and attended by the Council’s two vice presidents, the Government of Catalonia’s newly appointed Minister for Business and Knowledge, Santi Vila, and the Chairman of the Barcelona Chamber of Commerce, Miquel Valls, together with other institutional representatives. Fira reported some of its best ever results in 2016, with revenues of over 167 million euros, higher even than the figure announced at year end. This turnover was 9.8% higher than in 2014, a comparable year in terms of the events calendar, and 11.4% higher than in 2015. EBITDA was also at a record high of 20.4 million euros.
The Council commented favourably on the intense level of activity in 2017, with a total of 68 fairs and conferences taking place throughout the year plus some fifty corporate events held at the Montjuïc and Gran Via sites, and 13 events planned abroad. Thirty-one trade fairs were held in the first half of the year, including major industry events such as Mobile World Congress, Automobile Barcelona, Barcelona Bridal Fashion Week, Barcelona Building Construmat, the INTA Annual Meeting, dedicated to the protection of trademarks and brands, and Graphispag, plus the launch of new events Healthio, OralthBcn and Innovate4Climate. Events open to the general public included Motoh!, Bizbarcelona, B-Travel, El Saló de l’Ensenyament, the Comic Fair and the Sónar festival.
Venue for major healthcare and technology events
Plans for the second half of 2017 include a number of new events and intensive activity with 35 fairs and conferences. Fira de Barcelona will launch Barcelona Industry Week, a trade fair platform linked to innovation and the ‘fourth industrial revolution’, with Expoquimia, Eurosurfas, Equiplast, World Congress of Chemical Engineering and World Chemical Summit, Smart Chemistry, Smart Future, In(3D)ustry (3D printing) and IoT Solutions World Congress all being held simultaneously at the Gran Via exhibition centre from 2 to 6 October. These events will be attended by a thousand exhibitors, 850 speakers and over 50,000 trade professionals.
According to Josep Lluís Bonet, President of the Fira de Barcelona Governing Board, this new initiative ‘is a further demonstration of the institution’s commitment to innovation, with new events related to emerging sectors, and to the organisation of benchmark industry events, reinforcing its role as a driver of the economy and a generator of wealth and social value for the city and the region’.
It is important to note that the second half of the year will feature a significant number of medical and technological events such as the European Cardiology Congress, the world’s biggest event for cardiovascular specialists, attended by over 30,000 professionals from 150 countries, which is being held for the fifth time at the Gran Via venue (the last time was in 2014). Other events include the congresses of the European societies of gastroenterology, burns and magnetic resonance imaging specialists, the first of which will be attended by over 10,000 specialists, and other technology events such as SAP TechEd and VM World.
Other key events include the Smart City World Congress and Smart Mobility World Congress, two events that, in the words of Fira de Barcelona General Manager, Constantí Serrallonga, ‘make Barcelona the world capital of smart cities, new urban transport systems and the circular economy, demonstrating its clear commitment to sustainability and innovation’. Other major fairs will include Piscina & Wellness Barcelona, Barcelona Games World, the Barcelona International Boat Show, World Routes, IBTM World, Arnold Classic Europe and the Manga Fair.
Growing presence abroad
In 2017 Fira de Barcelona will continue to strengthen its presence abroad, helping companies to reach new markets. Of a total of thirteen jointly organised fairs to be held in other countries, eight have already taken place in the first half of the year: the launch of Pacgraf Cuba; the second HostelCuba fair; the Smart City Expo Congresses in Casablanca (Morocco) and Puebla (Mexico); the new Smart Island World Congress; Alimentaria Lisboa and Expo ANTAD & Alimentaria Mexico; and the Doha Motor Show.
A further five events will be organised in the second half of the year: Smart City Expo events in Kyoto and, for the first time, in Buenos Aires; two new events in Cuba linked to renewable energies and security (Energías Renovables and Securtec); and the handmade show in Doha. Fira de Barcelona also provides consultancy services in a number of countries.
Barcelona, 6 July 2017
Communication Area
Fira de Barcelona
Av. Reina Maria Cristina, s/n
08004 Barcelona
Tel. 93 233 20 00
prensa@firabarcelona.com
Previous
Next