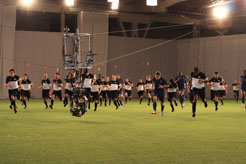 Shooting adverts and films in Montjuïc and Gran Via

Fira de Barcelona’s Montjuïc and Gran Via exhibition centres not only host trade shows, congresses and other events. Throughout the year, they also provide the set for television adverts, films and publicity photo sessions.

In total, over 100 adverts have been filmed. The list includes the Nike 2012 ad, which featured Barcelona Football Club’s new signing: Neymar. In order to shoot it, pavilion 2 in Gran Via was transformed into an immense virtual stadium where other great football stars played, such as Ribery, Iniesta, Piqué and Cristiano Ronaldo.

This was the result

Fira also provided the set for adverts for brands of fashion, cars, beverages, turrón, bank institutions and department stores, in which the actor Javier Bardem, the model Martina Klein and the actress Rossy de Palma participated.

Check out the best shoots here