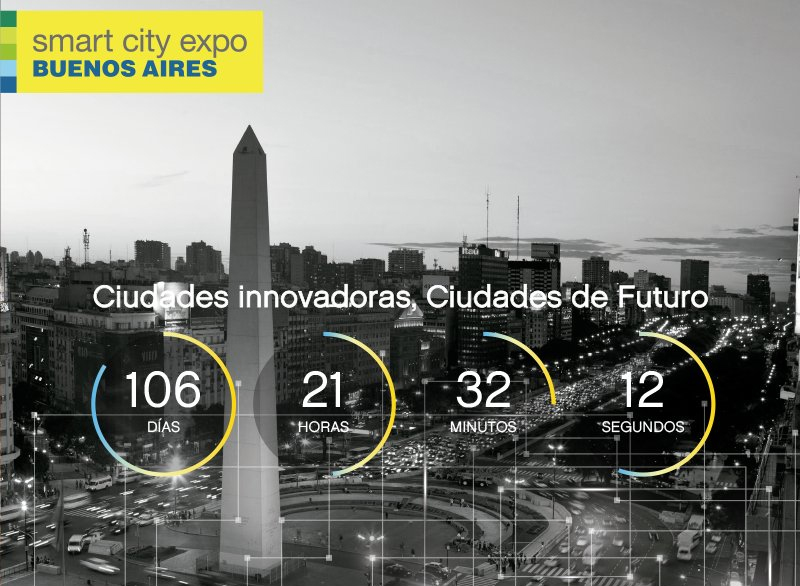 The Argentinian city hosts its first summit on smart cities under the claim "Innovative cities, cities of the future"

Cities from all over Latin America and across the globe will gather for three days in Buenos Aires for the first edition of Smart City Expo Buenos Aires, organized by Fira de Barcelona and the Government of the Autonomous City of Buenos Aires. From today until September 30th, and under the concept “Innovative cities, cities of the future”, the city will become the capital city of smart metropolises and will address the challenges facing large cities and specifically focusing on the needs and particularities of Latin America.

The Exhibition Area will feature more than 30 innovative companies amongst which are Avaya, Ausa, Claro, Deloitte, Dinalight, Enel, Infineon, Link, Intel, Microsoft, Philips Lighting, Roggio, Volkswagen, Qualcomm, Smart City TNG, Siemens, Telefónica, Trans, Urbetrack and Wisehood. The over 7,000 attendees will be able to discover the latest projects and solutions from these and other companies to foster efficient urban development in South America as well as various initiatives from the cities showcasing at the event.

International expansion
Fira de Barcelona’s International Business Director, Ricard Zapatero said that “with Smart City Expo Buenos Aires, Fira continues its strategy of international expansion of Smart City Expo World Congress as the benchmark event for smart cities, contributing to promote new initiatives in different parts of the world in the field of urban development, innovation and sustainability.” In this sense, Zapatero underlined the interest that the recent editions in Kyoto, Puebla, Istanbul or Casablanca have generated.

Smart City Expo World Congress will be held for the seventh time in the Gran Vía de Fira venue in Barcelona from 14 to 16 November, in which it will be the largest edition to date with the expected presence of 700 cities worldwide, as well as 600 exhibitors and 420 speakers. The event will focus on strategies to empower metropolises and their citizens through active participation, critical reflection, awareness and access to and control over important decisions and resources. It will also host the first Smart Mobility World Congress, a congress on intelligent transport, resulting from the merger of BcnRail, the international railway industry hall and the mobility section of SCEWC.