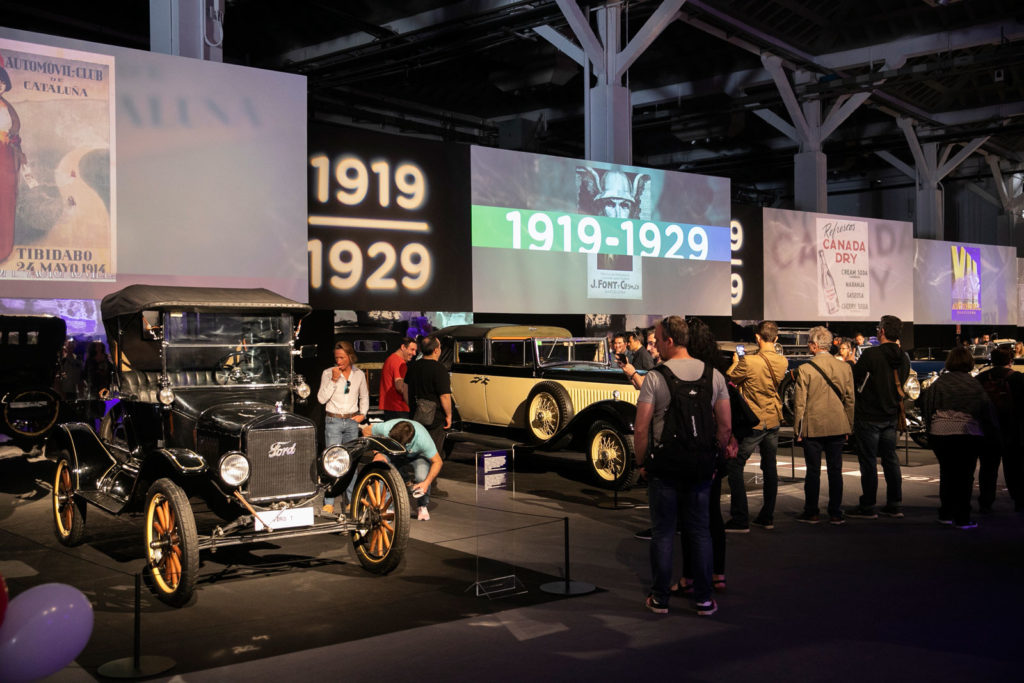 The sample gathers a total of 26 vehicles distributed by decade

Automobile Barcelona, the International Motor Show organised by Fira de Barcelona will, among the different activities to commemorate its 100 years, feature an exhibition that will display the most outstanding vehicles of the last century. The exhibition brings together a total of 26 vehicles distributed by decade and includes authentic industry legends such as the Ford Model T, symbol of assembly line production; the Rolls Royce Silver Ghost, icon of luxury in the automotive industry; the Willys jeep, the military precursor of sports utility vehicles, or the Ferrari Testarossa, icon of the supersports cars of the 1980s, among others.
The exhibition’s curators, Fermí Sulé and Pablo Gimeno, have selected two vehicles for each decade since the beginning of the Barcelona Motor Show in 1919. The cars on display from the first half of the 20th century will be the Elizalde T48 (1918), David 4 Cyl (1919), Ford Model T (1919), Rolls Royce Silver Ghost (1923), Hispano Suiza H6C (1924), Renault Nervasport (1932), Mercedes Benz 500 K (1936), Cord 812 Cabriolet (1937), Buick 76C Roadmaster (1941), Willys MB Jeep (1943) and Pegaso Z-102 Rabassada (1950).
Models selected from the second half of the 20th century and early 21st century are the Cadillac El Dorado (1955), Aston Martin DB5 (1964), Fervelectric Coche Electrico Español (1967), BMW M1 (1979/1981), Maserati Mexico (1971), Seat 1500 (1970), Ferrari Testarossa (1987), Porsche 911 Carrera Cabrio (1986), Seat Toledo Olímpico Eléctrico (1991), Jaguar XK R (1996), BMW Z8 (1999-2001) and Bentley Continental GT (2003).
The president of the motor show, Enrique Lacalle, said that “this exhibition is a fundamental part of the centenary activities. Gathering these 26 vehicles, many of them authentic works of art and museum pieces, in the same venue to offer visitors an authentic stroll through the history of the motor show and also of the automotive industry is undoubtedly a unique opportunity that reinforces Automobile Barcelona even more, if possible, as the great event of the year for motor lovers”.
In addition, the show will also include 3 iconic motorcycles – Guzzi 65, Montesa Impala and Bultaco Sherpa T 125, one of the six Bultacos that conquered the Himalayas in 1973 – that remind us of the periods in which two-wheeled vehicles were a fundamental part of the motor show’s offering.
The exhibition, located in Hall 7 of Fira de Barcelona’s Montjuïc venue, will be open to all visitors to the event and forms part of the programme of activities to commemorate the centenary of Automobile Barcelona, which will be held from 11 to 19 May 2019 and is the only show in Spain with international recognition from the OICA (Organisation Internationale des Constructeurs d’Automobiles) and which has the backing of the sector’s main associations such as Anfac and Aniacam.
Communication Area
Fira de Barcelona
Av. Reina Maria Cristina, s/n
08004 Barcelona
Tel. 93 233 20 00
prensa@firabarcelona.com
Previous
Next