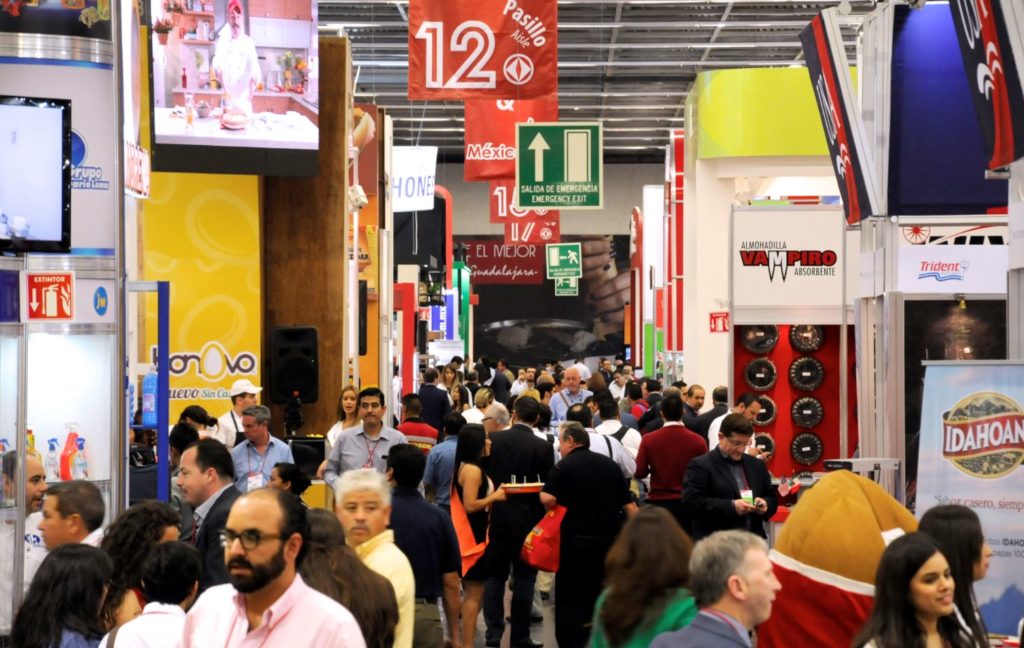 Expo ANTAD & Alimentaria Mexico 2019 – the leading fair in Latin America for professionals from the food industry, retail, distribution and the Food Service channel – is enhancing its international nature by increasing the surface area allocated to foreign exhibitors, which is set to reach 3,700 net m2. The trade show, which will be held at Expo Guadalajara (Mexico) from 5 to 7 March 2019, will host an exhibition with products from a total of 24 countries, most of them Asian and European and, to a lesser extent, Latin American.

This year, although there will be a majority of Asian companies in Alimentaria Mexico’s international hall (accounting for more than 51%), we should highlight the significant presence of European companies (around 35%), boosted by the new bilateral trade agreement signed by Mexico and the EU (European Union) last April. Under this new legal framework, the high Mexican tariffs on imports of key EU food products such as pasta, confectionery, cheeses, fruit, preserves and practically all kinds of pork and poultry products have been eliminated.

In addition, the EU, Mexico’s third-largest trading partner, will be the Featured Region at the event. This institutional presence will be evident in an area providing information to publicise the wide array of locally produced European products and a space devoted to cooking shows and tastings conducted by renowned chefs.

By countries, the European participation will be headed by Spain, with around 460 m2 of exhibition area. We should highlight the institutional support provided by the ICEX (Spanish Institute for Foreign Trade), which will bring together most of the Spanish firms attending the fair, in addition to those represented by the IPEX (Foreign Trade and Investment Institute of Castilla-La Mancha), Extenda (the External Promotion Agency of Andalusia), the IGAPE (Galician Institute of Economic Promotion) and the La Coruña Chamber of Commerce. In addition, the Castile and León ADE (Institute for Business Competitiveness) will take part with its own exhibition space, grouping together several companies from the region.

China will be the Asian country with the largest exhibition space (about 730 m2) and also the one with the most firms, many of them from Zhejiang, a province that is consolidating the commitment to Alimentaria Mexico that it began three years ago. In addition, Turkey will be the country with the most exhibition space after China and Spain, while Japan will again attend as an exhibitor. Similarly, the presence of countries from South Asia like the Philippines, Thailand, Indonesia and India will increase significantly.

As for the Americas, in addition to the large number of Mexican companies, the 50,000-plus professionals expected to visit the fair will find products chiefly from the United States, Canada, Peru and Argentina.

The most highly-represented sectors and ranges in Alimentaria Mexico’s international pavilion will be meat, alcoholic beverages and soft drinks, preserves, dairy products, ready meals and frozen and functional foods.

One of the main goals of Expo ANTAD Alimentaria Mexico 2019 is to give a greater impetus to its business meetings. To do so, the fair has organised the Business Meetings Programme, offering exhibitors and buyers an efficient matchmaking platform to facilitate contacts. This initiative will receive great support from buyers of members of ANTAD (the National Association of Supermarkets and Department Stores of Mexico, the event’s co-organiser).

According to Ricardo Márquez, the trade show’s director, “the presence of a wide range of buyers registered on the platform (representatives of over 100 chains that are members of ANTAD, as well as distributors, importers and the Food Service channel) guarantees business opportunities at Alimentaria Mexico, which will take a quantum leap this year by welcoming a greater degree of internationalisation“.

In addition, the fair will host conferences of great interest to the professionals at different trade show venues around the site, placing particular emphasis on those scheduled in the spaces for the Retail Talks. As for gastronomic activities, the most attractive will be presented in the Food Connections area (cooking shows divided into Drink Shows, Tasting and Cooking Experiences), while there will also be the final of the Chef of the Year Contest, involving seven competitors chosen from the different regions of Mexico over the last two years.

The forthcoming trade fair is expected to attract more than 1,800 companies (75% of them from the food and beverage sector) to Expo Guadalajara, spread over 55,000 m² of gross surface area, as well as more than 50,000 professionals from industry, retail, distribution and the Food Service channel.