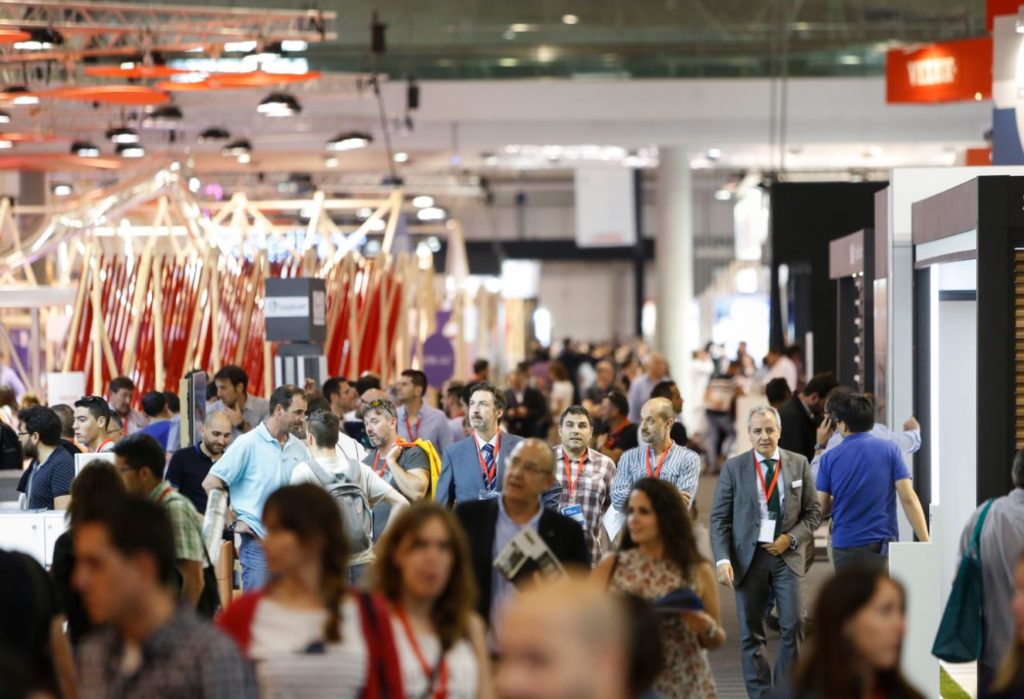 75% of the BBConstrumat exhibition space has already been booked

The 21st edition of Barcelona Building Construmat (BBConstrumat), which will take place between 14 and 17 May in the Gran Via venue, looks like being one of the best in recent years. With only 4 months to go, 75% of Fira de Barcelona's construction fair exhibition space has been booked, which is a 50% increase compared to the square meters booked in the same period for the 2017 edition.
The latest edition of BBConstrumat has awakened great expectations among construction companies in the country, with almost 200 confirmed and another 240 whose participation is in the pipeline, in an edition that expects to exceed the 2017 visitor numbers with the participation of companies from industries such as: machinery and tools, public spaces, prefabrication and industrialised construction, insulation, renewable energies, pavement, coating, kitchen and bathroom, lighting and electricity, air conditioning and heating, BIM, digital technology or service companies, among others.
With regards to the Fair’s 40th anniversary, the president of BBConstrumat and Sorigué, Ana Vallés, states that “since its first edition, in 1979, the fair has been able to reflect the reality of the industry and present advances, which has made it the most representative industry fair in Spain. In this regard, since the 2015 edition, BBConstrumat has been committed to innovation and digitalisation as the great levers for growth, in an approach that is being increasingly supported by all construction industry players”.
Among the interested companies, which will be integrated into the Fair’s exhibition area, the Industry Arena, are names such as Basf, Ciments Molins, Grohe, Knauf, Kömmerling, Layher, Plataforma Passivhaus, Saint Gobain, Sika, Simon and Sorigué.
In 2019, BBConstrumat will occupy 34,000 gross square metres of Hall 2 of the Fira de Barcelona Gran Via venue and will have an external exhibition space as a major development in which all kinds of demonstrations will be carried out by the exhibiting companies.
The architect Josep Ferrando is responsible for designing the Fair’s common areas in an ephemeral architecture project, in which reusing the materials used for the setting of the event is the most important aspect. Therefore, large white shades will frame the entrance and the exhibition space and large beams that are being used in the construction of the Sagrada Familia temple will be used as benches or counters.
Organised by Fira de Barcelona, the Fair will once again be committed to innovation, digitalisation, design, access to new international markets, sustainability and the promotion of business opportunities as a framework for encouraging the recovery of the industry. Furthermore, on its 40th anniversary, BBConstrumat will, once again, be structured around four thematic spaces (Future Arena, Industry Arena, Talks Arena and Meetings Arena).
Latest trends and startups
One of the highlights will be the Future Arena, the Fair’s disruptive innovation space that will once again present, over 2,000 square metres, the most transformational projects in the industry, being the only European sector-specific event that does so.
In this space, the initiatives of technology centres and universities in the fields of robotics, BIM technology, biomaterials and the circular economy will be made known under the curator of the Institute for Advanced Architecture of Catalonia(IAAC); the participating companies will present their latest developments in the Showroom and will have the opportunity to present their products in ten-minute presentations in the Technical Corner in an area coordinated by the Mies van der Rohe Foundation; and the top 20 European construction startups will be present at the Startup Village, which will be curated by the former director of the Mobile World Capital, Aleix Valls.

Furthermore, BBConstrumat will present several sustainable construction solutions that can be implemented in all types of buildings.

Business, internationalisation and knowledge
The Meetings Arena is the area set aside for networking and business relations under the coordination of the College of Interior Designers and Decorators of Catalonia (CODIC) in which the Contract Forum will be held with the presence of national and international projects in various areas such as the contract channel, retail or offices.
Within the framework of international relations, BBConstrumat will have a programme of international visitors from countries such as Argentina, Chile, Colombia, Israel, Mexico and Peru, who will attend the event with the aim of acquiring products or reaching commercial agreements with exhibitors. An agenda of B2B meetings and a programme of conferences and workshops; an advisory area for access to international markets by the Spanish Institute for Foreign Trade (ICEX) and Acció, The Government of Catalonia’s Agency for Business Competitiveness; a co-working space and the literary works on architecture and construction of the specialised La Capell bookstore complete the range of items on display in this area.
The Talks Arena will host a conference on innovation and urban regeneration that, for three days, will bring together speakers from all over the world, curated by the architect and editor Ricardo Devesa.
New professional services area
Another development this year is the launch of a professional services area (The Professional Spot), a pioneering initiative in the field of trade fair events in the construction industry, where architecture, engineering and interior design companies will be able to offer their services and exhibit their projects to both visitors and exhibitors.
Furthermore, the fair will have another area, coordinated by ITeC, in which the new work management models that are emerging in the construction industry will be revealed, such as BIM technology, the LEAN philosophy or IPD collaborative contracts, based on new technologies and the increase in collaboration between professionals. The fair will also present two buildings constructed according to sustainability criteria and will occupy the outdoor spaces with the presence of machinery, lift and transport companies.
BBConstrumat will round off the 2019 edition with the BBConstrumat Awards, which will have the categories of Constructed project, in the categories of ‘Architecture’ and ‘Infrastructures’, Innovative Project and/or Service, Innovative Product and/or material and best Stand at Barcelona Building Construmat 2019, as well as various business and industry meetings.
Barcelona, 7 February 2019
Communication Area
Fira de Barcelona
Av. Reina Maria Cristina, s/n
08004 Barcelona
Tel. 93 233 20 00
prensa@firabarcelona.com
Previous
Next