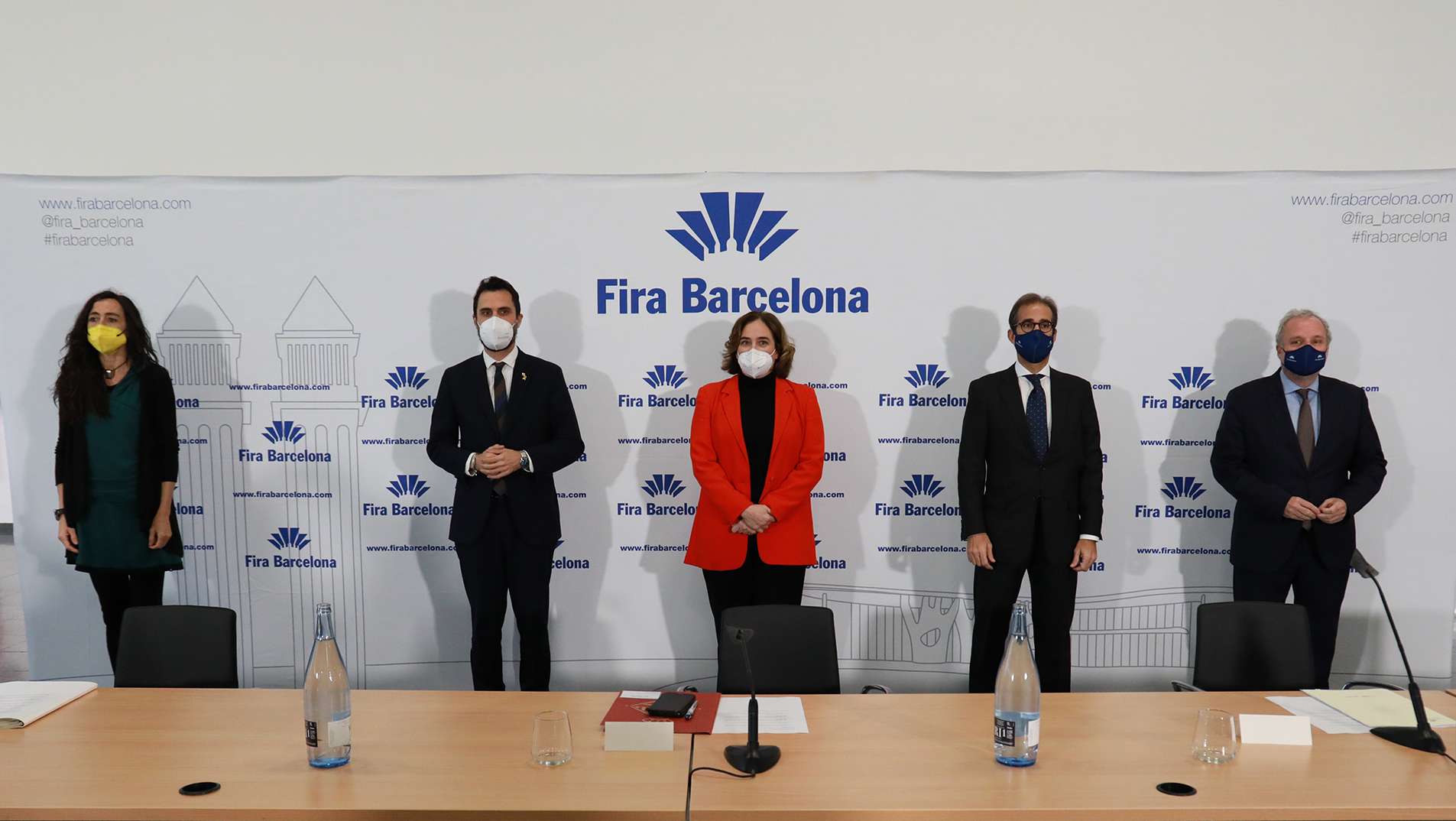 In 2021, the institution committed to holding trade fairs to help reactivate the economy

Fira de Barcelona foresees a year 2022 of great activity in its venues with the celebration of important international events such as Alimentaria, MWC Barcelona, ISE or Seafood, among others. The institution reaffirms its role as an economic and social driving force, something that it has already demonstrated during this 2021 in which, rather than profitability, it has prioritised the holding of trade fairs -albeit on a smaller scale- and set its sights on the next financial year, with the caution inherent in a situation that is still pandemic.

This plan was covered today at the meeting of Fira’s General Council, chaired by Ada Colau, the Mayoress of Barcelona, and attended by its Vice-Presidents, Roger Torrent, Minister of Business and Labour of the Generalitat, and Mònica Roca, President of the Barcelona Chamber of Commerce. Pau Relat, Chairman of the institution’s Board of Directors, and Constantí Serrallonga, General Manager, have also presented the economic results for 2021 with an estimated income of 60 million euros, thanks to the activity concentrated in the second part of the year, due to the impossibility of holding events during the first half of the year because of covid.

Pau Relat stated that “despite the fluctuating pandemic situation, we look to 2022 with optimism and caution at the same time, confident that we will be able to hold the large number of events planned —applying the relevant prevention measures—with the aim of contributing to the much-needed reactivation of the country’s industrial and social fabric”. In this sense, he also expressed “the importance of the progressive standardisation of international mobility and of the trade fair sector”. Relat also wanted to highlight, in line with Fira’s social commitment, the work of the large vaccination point that has been installed for months at Montjuïc venue.

Activity as a priority
For his part, Constantí Serrallonga, the General Manager, remarked that given the persistence of covid “it has been a more difficult year than was initially expected for Fira, for the entire trade fair sector, for the productive fabric and for society as a whole, which has had an impact on the results of many companies.” However, he stressed that despite the adverse context “Fira has opted to maintain as much activity as possible at the fairgrounds in order to contribute to the economic recovery, support other organisers and be prepared to face 2022 in the best conditions, both from an operational and logistical point of view and in terms of personnel.”

Fira de Barcelona expects to close the year with revenue of 60 million euros, which is explained by the effort made to organise events, even at the cost of profitability, as they are smaller in size and volume of participants but of great use to companies and productive sectors. Moreover, this activity has been concentrated in the second half of the year, since what was planned for the first half of the year had to be postponed. Serrallonga pointed out that “given the exceptional nature of the moment, these results are incomparable with those of previous years”.

However, the General Manager stressed that “the solidity and solvency of Fira reaffirm this commitment to recovering activity, contributing to the reactivation of the different productive sectors and preparing ourselves more strongly for the coming year”. A strategy that in such difficult circumstances, due to the effects of the pandemic and the impossibility of carrying out normal trade fair activities, the General Council has also highlighted.

At the expense of the evolution of the pandemic and the progressive normalisation of the trade fair calendar, the institution is already working with its sights set on 2022, a year which is expected to hold some 80 different national and international events, as well as activities in other countries. In addition to the face-to-face format, in which the established prevention measures will be applied, the digital proposal will be added in some cases, in order to broaden the international projection and impact.

Highlights include MWC Barcelona, the largest international trade fair for the mobile communications ecosystem, organised by GSMA, and which will take place at the end of February; ISE, the world’s most important audiovisual industry trade fair, which held for the first time this year a reduced edition in Barcelona, after being organised until now in Amsterdam; or Alimentaria&Hostelco, which brings together one of the largest food and beverage industry offers in Europe and which plans to hold a large event in May, after having to postpone the edition planned for 2021.

Fira is also preparing other important professional trade fairs in the food and beverage sector, such as Barcelona Wine Week and Gastronomic Forum Barcelona, as well as other important industrial sectors such as packaging and graphic printing with Hispack and Graphispag, Smart City Expo World Congress—a leading event in intelligent urban solutions— and IOT Solutions World Congress dedicated to industry-transforming technologies. In 2022 the intention is also to hold other fairs that have become benchmarks for the institution, such as Barcelona Bridal Fashion Week, Saló de l’Ensenyament and Futura, Boat Show, Liber, Bizbarcelona, Saló de l’Ocupació and B-Travel.

The calendar also includes important events organised by other operators such as Seafood Expo Global/Seafood Processing Global, the most important seafood event which, until now, was held in Brussels; the European Congress of Cardiology (ESC Congress), one of the most important in the world in its speciality; as well as the European meetings of Respiratory Medicine (ERS International Congress) and Education (EAIE); Ibtm World (business tourism); VM World (ICT); without forgetting other events such as Sónar, Comic Barcelona, Manga Barcelona and SIL, among others.

With regard to its foreign activity, Fira plans, with all the precautions due to the effects of covid in the world, to co-organise next year Smart City Expo Latam in Mérida (Mexico) and Smart City Expo in Doha, Curitiba (Brazil) and Shanghai, and four events in Cuba on food, construction, transport and renewable energies, as well as Expo ANTAD&Alimentaria Mexico, in addition to the management of two venues in China and the design of a third.

Increased competitivity
In addition to these events, there are more than 50 congresses and events scheduled at the Barcelona International Convention Centre (CCIB for its Spanish acronym), whose management was taken over by Fira last November and which allows the institution to gain competitiveness, strengthen its international positioning and carry out comprehensive management of the city’s three fairgrounds.

The events include mainly medical congresses such as the ESMO World Congress (which brings together experts in gastrointestinal cancer), CIRSE (on cardiovascular medicine), the International Society of Paediatric Oncology Congress, the European Association of Nuclear Medicine Congress, as well as various technological, corporate and cultural events such as the Java BCN Conference and CineEurope 2022.

Taking into account this important activity planning, but with the prudence required by the current health situation, Fira de Barcelona has set itself the objective of reaching in 2022 a turnover of more than 170 million euros, including the results of the CCIB. In this way, Fira has set itself the target for next year to fully develop its role as an economic and social engine for companies, especially SMEs, and for the country. In this sense, it is worth mentioning that, within the context of its full trade fair activity, the institution generates an annual economic impact of 4,710 million euros, with a Gross Added Value (GAV) equivalent to 1% of the Catalan GDP, 35,000 jobs and 971 million euros of tax revenue, according to a study conducted by the Barcelona Institute of Economics (IEB for its Spanish acronym) of the University of Barcelona (UB).

Commitment to society and sustainable development
Throughout 2021, Fira de Barcelona has continued its social commitment by collaborating with institutions and organisations to contribute to the fight against the pandemic. Proof of this is the vaccination point installed in palace 4 of Montjuïc venue, one of the largest in Catalonia belonging to the Department of Health. Indeed, Fira’s social work during the pandemic and its anti-Covid protocol, developed in collaboration with Hospital Clínic on its return to activity, earned Fira de Barcelona the UFI Operations & Services Award 2021 from the UFI, the world association of trade fair operators.

In 2021, the institution also reinforced its commitment to the Sustainable Development Goals (SDGs): it has obtained the ISO 14001 certification, the most internationally recognised standard in environmental management, it has launched the new Tomorrow Mobility event on sustainable urban mobility, and it has developed various actions within the framework of the trade fairs, such as carpet recycling and the Towards Zero Waste programme, among other initiatives.

This commitment has led it to adhere to the Joints Meetings Industry Council’s (JMIC) “Net Zero Carbon Events” initiative, which aims to achieve net zero carbon emissions by 2050.