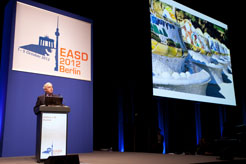 Around 20,000 specialists will meet up in the Gran Via Exhibition Centre

International Congress on the Study of Diabetes

Fira de Barcelona’s Gran Via Exhibition Centre will be hosting the annual congress of the European Association for the Study of Diabetes, one of the most important meetings of its kind in the world. It expects some 20,000 participants from September 23rd to 27th.

The meeting features a standout scientific programme with the participation of leading experts. Over five days, they will present the latest advances in prevention, diagnosis and treatment of this disease, which affects around 400 million people worldwide and is considered to be the main ailment of the 20th century, according to the World Health Organisation (WHO).

In Spain, it is estimated that between 10% and 15% of the adult population suffers from diabetes, according to Ministry of health sources. Around 29,000 children under the age of 15 are affected by this illness in Spain and data from the Federation of Spanish Diabetics (FEDE) indicate that there are 1,000 new cases every year.

Holding the European Congress for the Study of Diabetes in Fira responds to the institution’s strategy to attract large events related to health sciences. This year, medical congresses will bring together around 49,000 professionals in Fira.