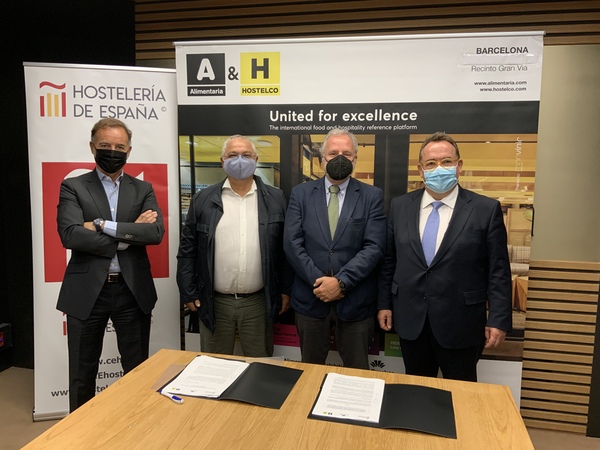 Alimentaria & Hostelco, the leading event in Spain and an international benchmark for the food and beverage, equipment and machinery industry for the restaurant, hotel and collectives sectors, and the Spanish Catering Corporate Confederation (CEHE in its original initials) have signed a collaboration agreement with the aim of promoting the hotel and catering industry, boosting commercial exchanges in the “Horeca” channel and contributing to the promotion of professional training in the sector.

After a difficult year for a sector that has been particularly hard hit by the pandemic, the aim of the agreement signed by the general director of Fira de Barcelona, Constantí Serrallonga, and the president of Hostelería de España, José Luis Yzuel, is to contribute to its recovery and reactivation, collaborating actively in the development of initiatives focused on the promotion of the hotel and catering industry, especially during the event that next year will once again bring together the entire industry at the Gran Via exhibition centre.

Through this agreement, Alimentaria & Hostelco will facilitate access to its facilities for students of the CEHE’s online training channel ‘Campus Hostelería’, which specialises in preparing hospitality professionals, with the aim of increasing their learning and networking opportunities thanks to direct contact with the leading companies in the “Horeca” channel. At the same time, Hostelería de España will facilitate access to its e-commerce platform ‘Horeca Market’ for exhibitors and visitors to Alimentaria & Hostelco interested in this commercial exchange channel dedicated exclusively to professionals in the sector.

According to the director of Alimentaria Exhibitions, J. Antonio Valls, “with this agreement Alimentaria & Hostelco and CEHE add synergies and revalidate the importance of the relationship that has historically united both entities”. He adds: “Now more than ever we want to be by the sector’s side and contribute to the reactivation and revitalisation of its business, giving greater impetus to its commercial opportunities, networking and training, basic and essential pillars for the complete recovery of the market”.

For his part, the president of the CEHE, José Luis Yzuel, states that “we are confident that the sector may be starting on the road to recovery, of which the celebration of a new edition of Alimentaria & Hostelco is a great marker. The reactivation of the hotel and catering industry must involve training and professionalisation, as well as digitalisation, both of which are elements of the agreement with the sector’s leading trade fair platform”.

A key sector for the country
Thanks to this agreement, the Alimentaria & Hostelco trade fairs aim to further strengthen the ties of collaboration with CEHE, the corporate organisation representing the country’s restaurants, bars, cafés and pubs. In 2019, before the crisis caused by COVID-19, the hospitality industry in Spain consisted of more than 300,000 establishments employing 1.7 million people and with a turnover of 129,341 million euros, contributing 6.2% to the GDP of the Spanish economy. Specifically, restaurants, bars, cafés and pubs employed 1.3 million people and had a turnover of around 98.06 billion euros, contributing 4.7% to the national GDP. Regarding these data, the drop in turnover is currently over 35% and there are 175,000 fewer workers.

Hostelco, organised by Fira de Barcelona and the Spanish Federation of Associations of Equipment Manufacturers for Hospitality, Collectives and Related Industries (FELAC in its original initials), will be celebrated with the Alimentaria trade fair from 4-7 April 2022 at the Fira de Barcelona Gran Via venue alongside the Restaurama trade fair. The events will bring together more than 4,500 exhibiting companies occupying 100,000 m2 of net exhibition space, forming the largest European platform for the entire value chain of the gastronomy and food and beverage and “Horeca” channel. They are also preparing new content aimed at enhancing their corporate character and contributing to the reactivation of their respective sectors.